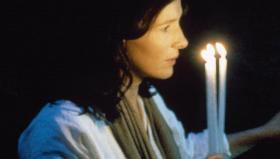 Sometimes a film shakes its makers. While watching Mary, you picture director Abel Ferrara in Rome, having a vision (as he dozes ’tween takes) about what it would be like if a mutiny were to fester amongst his cast. In the balance, the script becomes reality and the world back home, where all things familiar become insignificant. And in-between, you have a collision of stories that interplay with their combustions and chaos, where everything comes to a head and the pendulum swings completely off its axis. Bold strokes. Nothing less would be expected of Ferrara, who has mastered the technical and captured in two hours a scuffed-up gem of a film. Many Ferrara faithful fetching for something uncanny will line up and get what they bargained for. For others, seeing the marquee cast get a rare chance to look inward will try their patience. And many may not glob onto the subtext that New York has lost its edge and is more Disneyland than Gotham, and instantly think of the holy city of Jerusalem as no man’s land.

The film begins in dreamscape. Mary Palesi (Juliete Binoche) is Mary Magdalene in a cave stirring for remnants of her teacher Jesus (Matthew Modine). Eyes open. Reality sweeps in with the red tide and Tony Childress (Matthew Modine) is a megalomaniacal prick director who doesn’t comprehend the Pandora’s box he’s wrenched open with the making of his picture This Is My Blood. Fitting title and one to which many filmmakers—above and below the line—can relate. When Palesi goes AWOL and forfeits a return to city life and its attendant splendor, the film takes a random trajectory. Palesi believes she is some sort of second coming of an apostle and cannot get out of character. She leaves the comforts of life back home (though she still keeps hold of her mobile phone for some reason) and drifts into a sort of Sapphic bliss.

Back in Manhattan, a Charlie Rose-like personality named Ted Younger (Forest Whittaker)— whose wounded soul is worn on his sleeve—has got God on the mind, as well. His show is talking to intellectuals about various facets of Jesus and however engaged on-camera the bloke seems when the Klieg lights are hot, when they go dark, he’s chasing tail. Younger and his wife Elizabeth (Heather Graham) are well into their third trimester and tossing around names to give to their son once he’s born.

Younger meets the director Childress at a screening of the controversial film and implies that he would like the eccentric helmer (who cast himself as Jesus because there was nobody better) to come on his show and talk about the Son of God as portrayed in Hollywood. He accepts under the condition that Younger cover live the opening night of his film, and witness firsthand the redaction of the Constitution incarnate. He wants the revolution televised.

The chemistry isn’t lightning in every scene. But the build up is bubbling with tension and mystery. Modine is loud and arch while Whittaker is more visceral and sullen. When Childress cracks and really tries to take on the system with his machete mouth, the blade feels dulled some. Younger gets to the bones of his own troubles and clearly has some sort of divine intervention when he watches the film about Mary Magdalene. In essence, there are characters that become transformed by a greater power than themselves and others who just can’t seem to accept that they are playing with nuclear fission when tinkering with the good book. For the worlds of New York City and Jerusalem to intersect so seamlessly, Ferrara reveals how microscopic space and time are and tangentially portrays the city as this brooding organism.

Shots from taxis show skylines as these monolithic beasts that hover over our small stories and laugh at our problems. The lights become dizzying orbs all out of focus, and the characters move along, as if to keep alive. All the while, the actress-turned-Bedouin Palesi is quartered in Jerusalem, where she falls into the nucleus of asymmetrical warfare. The film cuts to the feature role she plays as Mary Magdelene; you hear her speak in verse, and it’s a beautiful thing. Her voice is fresh and sonorous. But she is ironically mute while bombs are going off.

There’s a level of genius to Ferrara’s depiction of salvation in a harsh world that neither forgives nor accepts. He probes and punctures the themes of loyalty and morality and goes to the jocular with the Biblical story rather than letting it be implied or referred to; he sticks his flag right smack into the Wailing Wall. No mercy here. And there is also the quiet, tension-filled air caulking together his scenes. The composition is hard to crack if that’s the intention of the viewer. Ultimately, the fronts and facades that people dress themselves in are ripped in slow-motion and nothing happens as it is expected. The hard become harder and the soft lose their innocence.

The film is an unforgiving portrayal of control lost and characters trying to make a sort of about face in their worlds, be they modern or ancient. You may not agree with the marching orders that are dictated, but you go on and will grow because of each step. At no time is there supposed to be a warm and fuzzy feeling to snuggle up next to you. If it does, it lands with a bang and will leave an itch so as to humble a hubristic heart. Stained and a touch deflowered will be the result of watching this film, and the whole time you’re jumping for joy.