close
Be it regal or revolting, The Matador demonstrates the allure of bullfighting 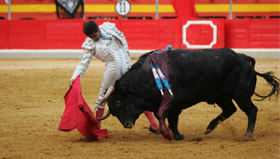 Whatever preconceptions about bullfighting one might have—peg it a barbaric and detestable blood sport or a beautiful death dance—it’s certainly made of the stuff that spews good drama. In The Matador, outsider Stephen Higgins managed to embed himself and a small crew for three years to brave the battles and capture modern lore in the process. The lowdown on the picture is that despite the gutting imagery, a sizable chunk gets sanitized. Much of the drawn-out assault on martyred bulls is seen through rose-colored shades. Bound to create a stir with the PETA camps, the film will still draw a sizable lot who want to see what makes this mêlée for mojo between man and beast such a spectacle.

“This is the life I have chosen,” says the documentary’s lead David Fandila, also known by the glorified moniker “El Fandi.” At the age of 24, the vigorous performer forgoes the basics afforded to his contemporaries: partying, downtime, safety. All are tossed aside to make way for a greater cause. And though young, he’s a master in his own right. Four generations before El Fandi have tried to wear his montera (hat) and excel to his prestigious level. They couldn’t. And the youth carries his family’s dreams on his shoulders with grace. El Fandi’s father tries to manage logistics behind the scenes, his mother gingerly watches from the stands and his poor brother is assigned the duty to be his assistant—to dress him and lug his bags from place to place.

Inside the stadium awaits a testosterone heavy crowd full of adoring fans—mostly elderly men. Anyone that’s been to a bullfight can smell death. The film touches on the process so as to coach those who are completely ignorant, but the film only glimpses on a key fact: the matador doesn’t just go out with the ritual sound of the trumpet, do a few spins with a cape and stab the bull through the heart. There are plenty of supporting cast members who break the bull before the final duel even commences. Makes for a pretty disproportionate battle. By the time the matador goes out into the ring to pirouette, the bull’s bleeding from the fatty shoulders and worn down. It’s not mano-a-mano but mano-a-manos.

Trailing El Fandi was a smart move. He’s soft on the eyes, has maturity and yet he’s also reserved. It’s easy for such a quality to bore the audience, but in this case the quietness comes across as contemplation. Besides, El Fandi tends to narrate much of the voice over, and it is the pairing of thought and inner dialogue that explains what is happening while we see El Fandi pacing in the hotel room just prior to showtime or awkwardly signing autographs for doting teenage girls. Inside the ring, a switch goes on because that is where the phenomenon is anything but withdrawn. His tricks are downright daring, and the fearlessness is redeeming. He conjures his comfort zone when he says, “I feel at home in the ring with the bull.”

You may shy away from the assault but there is something there that compels you to get behind this pugilist and hope he wins. You certainly aren’t rooting for the bull other than to plea that at some point he’ll get a much-talked-about pardon for fighting with bravery. It’s not giving anything away to mention that the bulls are never so lucky on-camera. Meantime, the filmmakers cleverly found a central tug to spice the drama. Only a small and legendary bunch of matadors (12 in total) have fought and killed 100 bulls in a season. El Fandi is determined to try and accomplish this task. With death a mere inches away at every moment (we’re not talking about ping-pong here!), the feat is one that has led to many an impaling.

Given the director’s photography background, much of the stuff looks really stellar. If he pushed the film a bit more in the same way as he did the look of it, the thing might be a true keeper. But Higgins isolates some of the hairy elements—perhaps to please the subjects. Walking a tightrope that praises but doesn’t glorify and also questions but doesn’t criticize is not simple to do. Bullfighting is quite harsh and often a bull just doesn’t die, and the animal convulses, and it’s an ugly slaughter echoed in the boos. Often, it’s not so clean as it’s portrayed in the film. Still, there is something beautiful in the character of this youngster with old ambition. What may become a lost art someday beholds mythical meat today. And the film does a fine job constructing a timeless piece of work with a sharp-bladed cleaver and steady hand.