close
Indie’s story is in ’Flux

Mattie Fresno and the Holoflux Universe 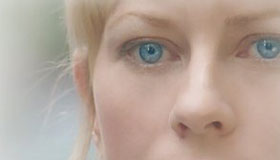 The Holoflux Universe of the title refers to a unified theory developed by the late Nobel Prize-winning grandfather of the film’s heroine, and that is exactly what Mattie Fresno and the Holoflux Universe itself is in need of—a unifying concept that could tie together its two obstinately parallel storylines. Billed as “a tale of public relations  and theoretical physics,” it delivers creative scenarios on both counts, but the central character feels too peripheral to them to be truly compelling. Set for an extremely limited release, Mattie Fresno —like the theory espoused by her grandfather—may attract a handful of dedicated adherents, but its prospects for widespread acceptance are slim.

Mattie Fresno (Angela Pierce) herself is a fall-gal, set up by her public-relations guru uncle to take the rap for a disastrous stunt that was intended to generate sympathy for talk show host Phoebe Lynn (Carol Alt), whose reputation is threatened by a deadly explosion at the Eastern European plant that manufactures her signature fragrance. The film opens after the fact, with Mattie in police custody giving a hard-boiled detective (Robert Clohessy) a surprisingly detailed account of the plot. Considering her since-escaped uncle and now-comatose father orchestrated said plot in closed-door sessions—at which she was not present—she knows a lot. As if this set-up wasn’t too talky to begin with, these scenes are intercut with an almost simultaneous spill session Mattie has with her cartoonish cellmate (Ellen Cleghorne). All the while, Mattie is attempting to make not a physical, but a mental, break from the Big House by opening a gateway into the alternate Holoflux Universe postulated by her grandfather Raff Buddemeyer (Orson Bean).

Ultimately, Mattie Fresno and the Holoflux Universe is a movie about big ideas that is simply too constrained by its theatrical staging necessitated by an apparently small budget. Also, the conspicuous casting of Saturday Night Live vet Cleghorne and erstwhile Dave Chappelle sidekick Charlie Murphy seems to indicate that the filmmakers feel there’s something funny going on here, but there are no laugh-out-loud moments and the tonal shifts between comedy and drama are rather abrupt. Giving the main character a greater role in the proceeding—say, as either the co-originator of the PR plot or the scientific theory at its split heart—might have helped. Instead, the audience is —like Mattie herself—largely left to sort things out based on secondhand information.