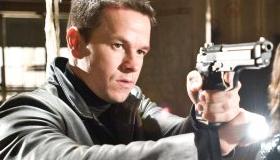 The term “style over substance” is extremely prominent in director John Moore’s creative arsenal. Responsible for flashy misfires like The Omen, Flight of the Phoenix and Behind Enemy Lines, his films have never aspired to cinematic greatness, but are not very good, either. With an already negative track record it’s no great surprise to report that his new film Max Payne, a sanitized version of the popular violent videogame, is no different. With an aggressive ad campaign and name actor Mark Wahlberg headlining the film, this story of a rogue cop looking to avenge the murder of his wife and child should find a strong opening weekend, but very little beyond that once word of mouth sets in.

Fans of the videogame this movie is based on will recognize the simple story of Max Payne (played with minimal expression by Wahlberg), a straight-laced New York detective who turns introverted and blood thirsty when his family is murdered by unknown assailants. The first few minutes are quick to catch us up on these details, cementing the fact that Max hasn’t found the people responsible for the murder and won’t rest until he does. The search for the bad guys leads Max to demonic villains, a greedy pharmaceutical company and the obligatory sexpot who wants to bed Max simply because he keeps turning her down.

I don’t have a problem with brainless entertainment playing it safe and overloading on clichés but Max Payne makes the fatal mistake of being clichéd and boring. There’s no interest or enjoyment since Moore squanders what little good will he had going with strong visuals and completely oversaturates the film with them. Strong visuals and the few creatively choreographed action scenes aren’t enough to make heads or tails out of what should be a straightforward story of revenge. A subplot involving a military experiment gone bad and rogue soldiers attacking the streets of New York City with superhuman drugs is laughably out of place. I also understand that every movie hero needs a sidekick, but does the film need a female badass who doesn’t look menacing at all? As played by That ’70s Show ’s Mila Kunis, the film has her dressed in tight leather and running around with guns twice her size. Add to that her poor line delivery, and she looks like she accidentally wandered into the frame from a bondage film.

All the flashy reasons to see Max Payne are in the film’s trailer, a nice piece of editing disguising the fact that the film is all smoke and mirrors. The noir-ish feel of the background and set design is intriguing at first, but later serves as a constant reminder that Max Payne has nothing else to offer.