close
These Monks went from artillery to hard rocks 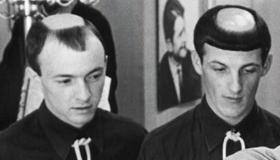 It could be said that a band comprised of five ex-infantrymen overseas kicking it in the early ’60s made a prophetic mark on the music landscape. And it took 30 years to finally give the would-be rock stars their due. Lucia Palacios and Dietmar Post are two directors who set out to right this wrong and unpeel the story. The Monks were the brainchild of two German visionaries who sculpted and devised a counterculture that upstaged Beatlemania. Transatlantic Feedback tells this story straight, conjuring how these talented musicians—with their booming beats and hard inflections—managed to seed a movement but missed out on fame, fortune and a deserved legacy in the pantheon of rock royalty. Until now. This is a tale of the great fail and reveals all the accoutrements (sweet and sour) bagged in the party favor. Ad agency types will rush the turnstiles to pat themselves on the backs while music aficionados will swallow hard the fact that the narcissistic U.S. was not the center of the universe and lacked the know-how to keep pace with the progressive European troubadours.

Before building a brand became commonplace, there were artists who hatched concepts in studio spaces and dropped them onto town squares. The juggernaut of revenue—the mere mention of an advertisement—was not yet conjectured and the power of ideas and their pluck retained a certain amount of innocence. In Germany circa 1964, American military might expanded its post-WWII shop around the world, supposedly in the name in freedom—not conquest—in order to have its interests and allies protected sunrise to sunset. A few GIs spent their off-hours playing instruments and, as luck would have it, the part-time musicians formed a band and gigged. They practiced “Jingle Bells” for small fests and hospital acts, where they covered the hits of the Stones and Beatles. It wasn’t until two future ad execs named Karl and Walter cropped the idea to metamorphose the unsuspecting Americans into a moving art installation. Think Andy Warhol and Velvet Underground topped with sauerkraut.

One band member looks back at his guinea-pig existence, saying, “It seemed like we were a constant workshop.” Deconstruction was the name of the game. The Beatles and the Rolling Stones were all the rage and the two creatives, who would later be the mouthpiece for pivotal ad campaigns for major corporations including Lufthanza Airlines, pierced a nerve. German audiences were very discerning and ran the gamut; but overall they were ready for something that flipped the hop on its side and brought in the hip. The present time sit downs with the band members today show Joe Sixpack-types who talk about their run as if they just fertilized their crops. They aren’t playing for the cameras and don’t dress the stories with a bunch of hyperbole. The anecdotes are told matter-of-factly, as if drank straight from the bottle rather than a glass. The crew of five honed their craft playing long sets and toured together in a beater VW bus.

Off came the coat and arms and on came the cowls and tunics. The band became more than just a vehicle for music. The Monks (formerly the Torqays) were an expression of revolt and discontent and yet they wore clerical tonsures for their hairdos—going completely against the shaggy signature cuts worn by Paul, John, Ringo and George. The industrial sound, composed of thunderous tom-tom percussions sans symbols, monster keyboard action and distorted feedback as well as punctuating banjo sounds, all armed to take aim at the atypical love ballad. While the masses were neatly tiptoeing to “I Want to Hold Your Hand,” Monks fans were digging on tracks like “I Hate You.”

The brutal and fascinating presence of the band left audiences open mouthed much of the time. You come back to the scene in Back to the Future where Michael J. Fox is performing a heavy metal solo a la Van Halen and the entire ’50s poodle-skirt-wearing dance stops and gawks. Fox quips, “I guess you guys aren’t ready for that yet. But your kids are gonna love it.” As the shock was always a staple at a Monks performance, there were other times when they instigated all-out vitriol. Some of their tracks were politically tinged, aggressively criticizing soldiers for their role in Vietnam. For this reason, they provoked many who had just returned from Vietnam to take out their anger on these hotshots in black monastic garb.

The film has some deep-rooted drama that seems to be subdued. The absence of the band’s framers seems to be a big loss. Why is it that both Karl and Walter—the founders of this phenomenon that imploded just before the boat to fame was docking—decided to not to be interviewed in the film? Only a title card reads that they declined. Are they ashamed of their puppetmaster roles? Are they down that the group never took off as they’d hoped? Was that their intention? Too many questions persist. What is understood is that despite the code they wrote out for the Monks to live by, when they disembarked from the band in 1967, the entire project became destitute: A ship without a captain. The members acquiesced to what was cool and grew their hair out. Started living amongst the rest of the populous instead of by the rules to which they had agreed.

In present time, you see the common lives of the Monks members. The keyboardist became a suit at IBM; another cleans churches. The life back in Germany is rooted in the past and bears little weight in the band members’ lives today. Yet they all feel more German than American. The film manages to capture a reunion in New York so that for the first time, The Monks, who were being billed along with Hendrix in Hamburg and were set to go a tour in Asia (but ditched that venture), got to play their first concert in New York before an audience of music heavyweights.

The work is significant because it found gold tucked deep in a rusted drawer way in the back of an armory and manages through stock footage and stills—even a few live performances—to reprise the caliber of talent The Monks were, both onstage and on wax. Perhaps their managers saw more potential than even the musicians did in themselves. Collectively, it all further breeds more drama and wonder. Hard to imagine how sated the media outlets were to not canvas the realms beyond Liverpool and see the promise of other sounds and ideas that went deeper than a yellow submarine. They blew this one. But with the power of the camera and nifty technology and a level-headed directing duo, we can relive the experiment again. Albeit with a few elliptical holes that will most likely go eternally unfilled.