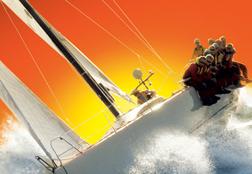 Making a documentary about the Transpacific Yacht Race may have seemed like a good idea at its inception, but proves to be painfully dull in the new film Morning Light. It’s getting the full push after landing a distribution deal with Walt Disney Pictures and having Walt’s nephew Roy E. Disney serve as both a producer and one of the subjects of the film. Roy has raced the famous Transpac 16 times and has the battle scars to prove it. Although his heart is in the right place, Morning Light is not an effective film and, despite the Disney name, will have trouble making a dent at the box office.

Narrated by comedic actor Patrick Warburton, Morning Light introduces viewers the famous yacht race from California to Hawaii that takes about 11 days. People put everything they have into this competition and see it as a life-and-death challenge. For the first half of the film, we are introduced to the 15 people inhabiting this brazen sport and their motivations for wanting to win the race. They range in age from 18 to 23, and each has a diverse tale for the camera, stating their case for why they are best suited to win.

Stories are shared and emotions are drawn, but with cameras set up all around the participants, it becomes easier to get distracted by the filmmakers instead of getting genuine reactions. As the film goes on, it becomes more apparent that some of the subjects have second agendas when they speak to the cameras. In fact, the first half of Morning Light is overstuffed with so much exposition that by the time the actual race starts in the second half of the film, it’s difficult to care after being bogged down with so much unnecessary footage.

Roy E. Disney has made it clear that Morning Light is a passion project; he loves the Transpac and has won the race several times. If anyone is qualified to bring this story to the screen, it’s him, but director Mark Monroe films most of the action in a lazy and distanced approach. The little connection to the subjects only adds to the film’s problems and at times makes it seem amateurish and dull. There is a limited audience for fans of the Transpac, but that group would be better served with a more in-depth and engaging documentary. As it stands, all good intentions aside, Morning Light is nothing more than a glorified television documentary. It’s not a bad film, but it’s not a great one, either. Perhaps Disney could make a follow-up documentary somewhere down the line with another group of Transpac racers. After going through the making of this film, he might be able to bring a lot more experience crafting a better film with his creative team the next time around.