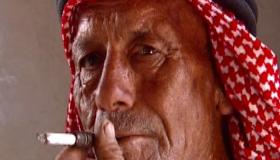 Israeli filmmaker Amos Gitai completes his nonfiction trilogy, begun 28 years ago, about a house in West Jerusalem forcibly abandoned by its Palestinian owner during the 1948 war. Comparing his project, and all documentary filmmaking, to an archeological dig—as opposed to the architectural nature of making fictional movies—Gitai examines the lives of people connected to the house with courtesy and circumspection. The update holds a certain intrigue yet is necessarily rambling and partial, which is why it’s best to see all three films together—an opportunity afforded by programmers at the Museum of Modern Art for one week only.

1980’s House was the prolific Gitai’s first film, and he followed it up in 1998 with A House in Jerusalem. In the “new chapter of this open human site,” he splices in footage from the first though not the second film. Narrating and appearing on camera, he’s a genial guide-cum-caller, met with cordial informality by his subjects. He spends time listening to a 70-year-old Palestinian stonecutter who appeared in the first movie while working on the house and who has been prevented from occupying his own home by the Israeli government. Gitai’s second set of subjects are members of the Dajani family. Now living in East Jerusalem where he runs a clinic, Dr. Dajani was born in the house and wistfully reminisces while sitting beside his young-adult daughter.

We also accompany Gitai as he visits with the doctor’s elderly uncle and his cousin Rabija, a spry, raven-haired octogenarian living in Amman, Jordan. The life story of Claire Cesari, a Jew who emigrated from Turkey and the present owner of the house, is equally colorful. Finally, Gitai briefly interviews Steve Levy, the contractor, originally from South Africa, currently building a new structure next door to the house.

The bare outlines of these lives underscore Gitai’s fundamental point that biography is inextricably linked to geopolitics: genealogy and geography cannot be separated. By sitting in their parlors, sifting through the past collected in photo albums, memories and mementos, he enforces his idea that the house is a metaphor for a new Diaspora and “remains both an emotional and physical center at the heart of the Israeli-Palestinian situation.” If each person “becomes a sign of the region’s destiny,” as Gitai argues, then the prospects for peace and unity—some wholeness and harmony—aren’t bright.

The director’s adeptness at executing long, meaningful tracking shots is most in evidence when he slowly moves along a wall recently erected by the Israeli government. This is what separates the stonecutter from his native village and home. The sturdy, impenetrable structure represents the opposite of a house that is continually being re-constructed and added onto, both physically and in terms of the different people occupying it.

Gitai takes the notion of upended and relocated lives too literally insofar as it’s hard to get your bearings watching News From Home. The archeological metaphor makes logical sense without making for the most clarifying film. The difficulty the viewer has gaining a foothold is to be expected. The titular dwelling is a puzzle that resists being neatly put together—a symbol of the intractable problems that separate Israel and Palestine, Jews and Arabs in the region and elsewhere.

Gitai goes a step further by suggesting that juxtaposing the bits and pieces is all that a filmmaker can do and that that’s a vital function. After more people have gone away and the physical structure has been altered yet again (even after the house is no longer standing), we’ll still have the story told in these films. Driven by that lofty purpose, you suspect Gitai will be revisiting this house in the future, adding onto his trilogy and continuing to tell this fragmentary and far-reaching narrative.