close
This Playlist is worth a listen 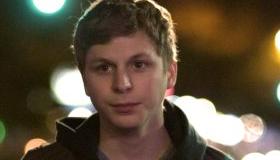 Nick and Norah’s Infinite Playlist is a film that sometimes relies on coincidence and leaps of logic, but is enjoyable at the same time. The Manhattan love story between two high school outcasts is a comedy, a heartwarmer and a race against time all in one. Director Peter Sollett painted a different side of New York in his debut feature Raising Victor Vargas, but here successfully mixes genres and earns genuine laughs. The film’s brisk running time and fun tone should be enough to attract young moviegoers looking to enjoy themselves on opening weekend.

Michael Cera and Kat Dennings play our heroes Nick and Norah. Cera is best known for playing shy introverts in movies like Superbad and Juno, while Dennings played a misunderstood teen in The 40 Year Old Virgin. Neither actors deviates from their previous on-screen personas in Nick and Norah‘s Infinite Playlist, and that’s part of the charm.

At the start of the film, we see the two strangers at the beginning of separate breakups. Nick is taking it a lot harder than Norah. It almost feels like the genders are reversed, since Nick is the sensitive one making personalized mix CDs for his ex in a desperate attempt to win her back. Norah, on the other hand, is tough on the outside but hurt and insecure on the inside, never letting her guard down even when she starts to crush on Nick from afar. Through coincidence and a strong love of music, they end up at the same bar (he’s playing in a band, and she’s in the crowd), meet cute and spend the rest of the movie driving around Manhattan getting to know each other. Adventure and conflict naturally ensue, guaranteeing that Nick and Norah earn their affection from the audience and each other.

There are small plot devices that are exclusively built in to move the story along, but they never get in the way. The search for Norah’s lost drunken friend and her escapades in restaurants and dirty toilets sometime seem out of a different movie, but are never boring. The same can be said for Nick and Norah’s frantic race to locate the whereabouts of mysterious band Where’s Fluffy, a band name as silly as its plot point.

Nick and Norah the movie is mostly held together by Nick and Norah themselves. Cera and Dennings have a relaxed chemistry together that doesn’t feel forced and makes it easier for the audience to connect with their unique and sometimes awkward courtship. The coincidences and leaps of logic are few, but also seem appropriate for such a relaxed and carefree film. In the end, Nick and Norah’s Infinite Playlist is an enjoyable ride, download or whatever hip compliment aligns itself best to the indie feel of its two leads.