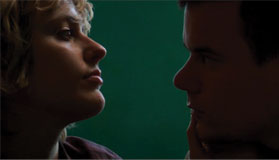 The first couple of mumblecore, Joe Swanberg and Greta Gerwig, write, direct and star in Nights and Weekends. This quiet and occasionally straining drama narrowly plumbs the (possibly imaginary) depths of an ill-fated long-distance relationship. Intermittently, the film is deeply intimate and awkwardly surface. In one moment, we’re nearly between the characters as they explore a space where the two are united to the exclusion of the world, while in other moments, we see Mattie and James in bed or in a park, and it’s as though we have no access to the characters as deeper inventions at all. The interplay of image and identity, surface and substance, past and present, adds a gentle and looming thread to this film that might otherwise be an experiment in audience tolerance. More mature than past ventures and more palatable, Nights and Weekends will draw modest but affectionate crowds, and could indoctrinate collections of the mumble-curious.

James and Mattie live in Chicago and New York, respectively, and struggle to hold together a relationship between the cities. In bed, on their second visit (they regroup in alternating cities, every three months), Mattie calls their situation “unsustainable.” We hear the couple’s piddling arguments, see them bicker over things that would hardly matter if they saw each other more frequently. And this is part of what makes their often-indefensible arguments seem at once futile and also strikingly destructive. The pressure of their limited time together puts immediate strain on all their exchanges. In bed, the couple seems perfectly paired, but in the world outside, even having dinner with James’ brother (played by fellow mumblecore filmmaker Jay Duplass of Baghead ), they instantly morph into goldfish set free of their bowls.

The couple Swanberg and Gerwig play are videogame designer James and professionally uncertain ex-student Mattie. Loosely drawn, James and Mattie are not the sort of characters who forge lives onscreen and leave resonant traces in the memories of crowds. At times, James and Mattie feel like they’re all shell and no meat. Oddly, this almost-anti-character development creates an experience that jumbles “just like life” believability and slap-dash representation, thus inspiring both confusion and pathos. I never believed in the characters, and so didn’t feel particular concern for them, but the emotions they slightly demonstrated were, by way of a loose translation, highly relatable. The film is almost like abstract expressionism in that you’re provoked, but the provocation is incomplete and requires you to piece it together to even engage with it—as such you feel like you’re going through an experience somehow as messy as what the characters are enduring. But this mess is not as accessible as the mess in say, Eternal Sunshine of the Spotless Mind.

While successful, it’s hard to call pleasant. You’re never sure where these characters are going because they aren’t sure. While that has become something of a modus operandi for indie film (in its modern genre incarnation, anyway), and an agenda for mumblecore in particular, the agenda is demonstrated here in ways more explicit than has been seen in other mumblecore anti-classics like The Puffy Chair or LOL, and as such, it’s easier to interrogate. Though more explicit, this MO is not self-aware.

All of this borderline unfriendly interrogation about the strength of the characters doesn’t detract from the fact the film is very aesthetically consistent. One imagines the film is making a gentle attempt to be a modern Scenes from a Marriage, and while that’s a tall order, Gerwig and Swanberg aren’t terribly far from the mark.

The most casually layered, and heavily provocative sequence in the film happens when the New York Times interviews and photographs James. James and Mattie broke up sometime between the last visit and James’ interview, and still James suggests Mattie dress like him and attends the shoot. The photographer mistakes her for his girlfriend, and since both wish the error were true, neither corrects her. Their photos are a marvelous record of their exchanges: as sweet as they are awkward, and often sexy because they seem inappropriate. When looking at the photos after the shoot, James says they’re like looking at a past image of the people they are today. Looking to find what they know they’ve lost, the two try to have sex and can’t. All of the sudden, the couple is stymied by inaction at the very moment the film is broken free of it. Here, at the most dramatic point in the film, we, like the couple, can’t do anything more than leave the frame.