Otto; or, Up With Dead People 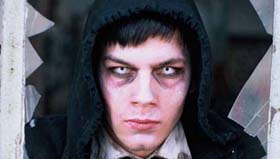 Will Otto; or, Up With Dead People perform at the box office? Well, sure, inasmuch as any work of gay pornography that features one man having sex with another through the wound in a split torso ever does. Promiscuous punk provocateur Bruce La Bruce has made what could be his most accessible movie, in that it parodies a form (the George Romero zombie picture) that is already so extreme that his own predilection for visual and philosophical outrage doesn’t have to swell to fill the scenery. If Otto ’s brutality is genuinely unerotic (thereby failing what ought to be a paramount test for any self-proclaimed porn king), the compensations—both visual and satiric—are more than offsetting.

In a scenario that uses zombie genre clichés as a flexible metaphor not only for AIDS and gay-bashing but also for unthinking conformity within the gay sex scene, Otto (Jey Crisfar) is a sweet-natured zombie in a world that scarcely takes note of him. Then the fulsomely named lesbian filmmaker Medea Yarn (Katharina Klewinghaus) takes a shine to Otto and casts him as the lead in her own post-apocalyptic zombie epic. Only Otto seems to realize that his very presence means that in essence the apocalypse has already come....

La Bruce appears attracted to the zombie film not only because it traffics in comic extremes but because of its fundamental allegorical surrealism. As demonstrated by Otto ’s many imaginative and pithy visual devices (including a character who speaks in title cards and carries her own pocket of black-and-white cinematography and negative scratches with her like a shroud), La Bruce’s imagistic tendencies are closer to Cocteau and Murnau than they are to Night of the Living Dead, but he respects Romero’s visual syntax enough to take it seriously, which is all that’s required to make the parody work.

As a director of actors, La Bruce remains an unapologetic disciple of Andy Warhol. Everyone looks striking, wears clothes well and speaks without the slightest suggestion of technical skill or character psychology the moment they open their mouths. Still, when the viscera and seminal fluids are cleared away, there is something less flagrant but more durable resembling a beating heart inside this bloody stump of a movie—a coded message to do with loneliness and loss. For all its blood and thunder, this is a grief-stricken movie, possibly even a cry from the soul. It just goes to prove that flowers of melancholy can blossom anywhere—even amongst the most giddily unlikely deathhouse charnel.