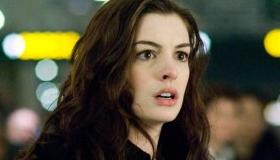 Rodrigo Garcia’s convoluted film about a young, stern therapist named Claire (Anne Hathaway) shepherding a group of plane-crash survivors can be shorthanded with an acronym: PTSD ESP. The dark, CSI-hued flick goes through as many lives as an unlucky cat. In addition to aspiring to be a sensitive portrait of emotional healing, it’s also a supernatural mystery, a romantic comedy, a family weepy and a corporate conspiracy drama. One plot might have satisfied audiences; fractions won’t, which is likely why Sony slipped it in without buzz and expects it to sink.

Hathaway’s Claire is rigid, humorless and rudderless—she can’t crack a smile or finish her PhD. Nevertheless, she’s put in charge of a half dozen people who have achieved two miraculous coincidences: they’ve emerged unscathed from a nasty, high-body-count plane crash, and they somehow live within minutes of each other in the same nameless gray city. Neither fact raises any eyebrows to the people in Ronnie Christiansen’s script. More alarming to them is that the survivors can’t agree on whether the plane crashed then exploded, or exploded then crashed. Despite her supervisor (Andre Braugher) warning her that she’s not a detective, Claire can’t keep herself from popping up in the airport and questioning a secretive airline representative (David Morse) who seems to be a higher up official, but can generally be found milling around the terminal. The airline has good reason for insisting the crash was human error, and when Claire’s patients start disappearing, we almost think that Garcia’s just hammed up a decent script. But no such luck as the moderately intriguing storyline gets shunted aside for nonsense scenes where Claire learns to loosen her hair from her proverbial (and literal) bun courtesy of Patrick Wilson (a twin of the late Paul Newman, only buffer) as the world’s hunkiest plane crash survivor, who also happens to be rich, infatuated with his dour doc and prone to faking his own death.

What makes Garcia’s film such a bummer besides a ridiculous twist ending (M. Night Shyamalan, what hath thou wrought?) is that everyone in the film is a darned good actor, doing darned good work for zero gain. Hathaway is particularly strong, though she’s given little to do besides soak in people’s problems with her luminous brown eyes. Clea DuVall shines in a small role as one Claire’s difficult patients. And as Claire’s loopy and obsessive neighbor Toni, who likes to accost Hathaway in the laundry room and ask her expository questions about her life, Dianne Wiest somehow makes lines like “spread your wings!” seem almost plausible in a film whose credibility is as low as W.’s approval ratings.