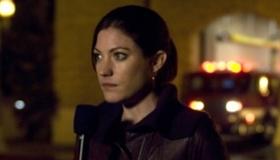 This is the American adaptation of a popular Spanish film called [Rec]. It’s a reference to the “Recording” signature that one sees through the viewfinder of a camera when it’s recording. (Yes, very clever.) This [Rec] adaptation is called Quarantine, which is also clever, although perhaps not as clever. It’s about group of people who get trapped in a positively gothic L.A. apartment complex that couldn’t possibly exist in Los Angeles. As they enter, the complex comes under quarantine for causes unknown. From the view of this critic, who’s a less-than-enthusiastic viewer of horror films (or rather, the snuff films that pass for contemporary horror), this one is no better or worse than the rest, and will likely do just about as well. Which apparently means it’ll do decently, because studios keep making them—despite fact that they’re disgusting.

Effectively, Quarantine is shot like Cloverfield —irritatingly—with the kill dynamic of 28 Days Later. It isn’t as funny as Cloverfield, yet it’s funnier than 28 Days Later (which isn’t funny at all). One wonders if either the Spanish or the American film, or both, were planned to fit nicely into the niche between those two films. In any case, we begin with a young female reporter on assignment to record the goings on at a local fire station, reality exposé show style. Jennifer Carpenter from The Exorcism of Emily Rose is the reporter, Steve Harris from the television series The Practice is the guy behind the camera. Not to be redundant, but everything we see is from the point-of-view of one camera. It’s the new (if old), clever thing.

What we see is a 20-minute prologue intended to introduce us to the kind, smart, funny, over-sexed characters whose names we will not mention here, but whom will be eaten later, which reveals nothing you did not know, because everyone is always eaten (or otherwise destroyed) in apocalyptic horror.

Near the end of the film, when nearly everyone has been eaten, things get really spacey: the big-headed babies and glimpses of albino freaks you’ve seen in the ads begin to appear. This is funny, though the images would be more interesting if you hadn’t seen them in the ads.

Ultimately, this critic’s prejudices aside, the film does what it does well.