close
Rachel marks a return to form for Demme 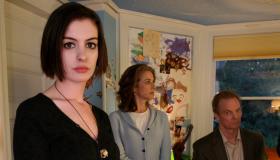 Filled with raw emotion and uncomfortable truths, Rachel Getting Married is a return to form for director Jonathan Demme after several critical and commercial duds. The film follows the chaotic few days leading up to an interracial marriage where both families converge and expose the skeletons bursting from their closets. It’s a strong character piece led by Anne Hathaway’s firehouse performance, proving that she’s not just a pretty face and ensuring strong numbers at the arthouse box office.

Kym (Hathaway) is a recovering addict, fresh out of her most recent stint at rehab. Haunted by the death of her younger brother Ethan, she musters whatever courage she has left to attend the wedding of her older sister Rachel and put on a brave face. Riddled with lies and half-truths, Kym seems to be in a zombie state for the first third of the movie, reconnecting with family members but also keeping them at a distance. She’s become extremely introverted and blames herself for Ethan’s death, a topic that is off limits to anyone in the family—making closure and acceptance that much harder.

Director Demme paints both sides of this interracial coupling with very different strokes and uneven attention. Sidney (Tunde Adebimpe) is the happy-go-lucky groom, an African-American musician whose love and support for his bride is only outmatched by his family. Rachel (Rosemarie DeWitt) is the Caucasian bride, who is determined not to let her personal insecurities get the best of her on her wedding day. That along with Ethan’s death and her emotional disconnect with younger sister Kym put a flurry of added pressure on the bride’s side of the family. Kym and Rachel’s divorced parents (Bill Irwin and Debra Winger), in particular, are the ones who try to hold the family together despite their many flaws. As the film progresses, so does the tension, resulting in an emotional tug-of-war between the two sisters and completely cutting out the groom’s side of the family for the second half of the movie.

Rachel Getting Married has more in common with the great Dogme film The Celebration than last year’s overacted Margot at the Wedding. All three films deal with a family’s unraveling during a wedding, but in Rachel ’s case the source material is elevated by director Demme and lead actress Hathaway, taking an interesting but flawed script from Jenny Lumet (daughter of late director Sidney Lumet) and transforming it into something special.

Jonathan Demme’s documentary passion projects like Neil Young: Heart of Gold and Jimmy Carter: Man From Plains helped him experiment with digital filmmaking and that technique is on full display in Rachel Getting Married. It gives the film a raw, edgy look that gets in your face in all the right ways.