Stranded: I’ve Come from a Plane That Crashed on the Mountains 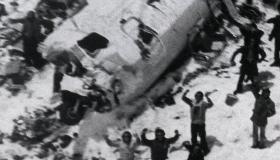 The initial question hanging over the documentary Stranded is why would survivors of a well-documented 1972 plane crash in the Andes want to revisit their long ordeal? For that matter, why would anyone want to watch a movie about it, especially if they’d seen 1993’s Alive or read the best-selling book on which that movie was based? Profound answers are forthcoming in this gripping film that treats a harrowingly existential subject with skill and tact. Don’t let anything, least of all the awkward subtitle I’ve Come from a Plane That Crashed on the Mountains, deter you from catching Stranded when it rolls out nationally in November after an initial theatrical run at Gotham’s Film Forum.

Veteran documentarian Gonzalo Arijon was a childhood friend of a number of those aboard the Uruguayan Army plane that left Montevideo on Friday October 13, 1972. Bound for Chile, it carried the Old Christians, a rugby team organized by Irish monks and comprised of affluent 19- and 20-year-olds, many of whom were medical students. A handful of family members and chaperones were also on board. Trust was obviously the key to this project since director Arijon had to persuade the 16 survivors to describe their 72-day struggle. One imagines it took 35 years for them to process the experience and be able to participate. Their vivid accounts aren’t supplemented by narration or an abundance of title cards, and the movie features a smattering of archival footage and a few photos taken at the site on a remote Andean glacier where the plane’s fuselage came to rest after a weather-induced accident.

Thanks to his technical competence, plus the compelling nature of the survivor’s reflections, reservations about Arijon’s use of reenactments melts away. The recreations aren’t full-blown dramatizations; there’s no dialogue and you quickly get used to them as they become essential to the movie’s flow. It builds toward recent footage of a handful of survivors at the crash site with their children, at which point medals for stoicism should be awarded to any audience member who can refrain from crying.

Cannibalism was the headline back in the ’70s and a major reason this story received so much attention, holding people around the world—myself included—in its thrall. Physical revulsion was my fundamental reaction, in contrast to the spiritual and psychological squeamishness so eloquently described by the survivors here. Presumably, hunger overrode the physical obstacles to eating the flesh of their deceased fellow passengers. What is remarkable—and what constitutes the proper headline for Stranded —are their descriptions of their moral hesitancy. Concerns expressed about desecration and descending into savagery are arguably the most fascinating passages in the movie. And you don’t get the impression anyone is being defensive or making it up in retrospect to justify what they chose to do to survive.

Their religiosity was a huge factor and was more than just a cultural ethos or generically Christian outlook. It was specifically Catholic as regards the doctrine of transubstantiation. They recount how they likened consuming their fellow passengers to receiving Holy Communion, ingesting the body and blood of Christ. One recalls telling a hesitant teammate to look at it as a sacrifice the dead were making for their friends, just as Christ died to save humanity. Another remembers thinking about the Last Supper.

While their faith was evidently crucial to their ability to endure, doubts about theism are expressed, and no one seems to have been “born again” or to have considered the experience as primarily religious in nature. The fact that these 16 young men were smart and physically fit was just as important as their spirituality. In other words, Stranded is not about dying or the afterlife; it tells a story about both the precariousness and powerful pull of this life and about how difficult it is to pinpoint the deciding factor between life and death. The only certainties transmitted: It’s a joy be alive and few stories of human survival have the same complex resonance.