close
A pair of Little Miss Sunshine producers try to clean up with another dysfunctional family drama, but dysfunction finds the filmmakers too 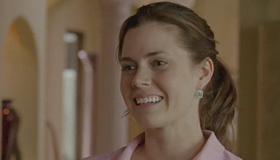 Sunshine Cleaning may go down in film festival history, but not for the reasons the people who made it had hoped. Closer to a piece of genetic engineering than it is to satisfying filmmaking, director Christine Jeffs’ effort in labored quirkiness and insincere emotionalism struggles hard to be simultaneously edgy and sentimental, succeeding at neither. Shepherded by the same production company that struck gold with Little Miss Sunshine at Sundance 2006, this film’s failure to find distribution at Sundance ’08 demonstrated two things: that the “studio indies” are smart enough to know when they’re being pandered to, and that indie-style cinema, long thought to be a haven of originality and a respite from formula filmmaking, is in the later stages of becoming a genre itself.

How else to explain this movie—an indie super-concoction that adheres as rigidly to its conventions as any cop flick or teen sex farce? Here’s the recipe: First, you take a brace of hot indie actors (Amy Adams, Emily Blunt, Alan Arkin, Steve Zahn, Clifton Collins Jr.) and package them together in the hope that their semi-stardom collectively equates to at least one mainstream star. Then, arrange your performers around a dysfunctional family saga with black comedy undertones. The hoped-for outcome used to be an ersatz Wes Anderson movie, but nowadays it’s a Little Miss Sunshine variant. Jeffs and screenwriter Megan Holly even have the blind idiot courage to name-check that far superior movie with their title.

Give your protagonists indie-movie jobs—because nobody in an indie movie is ever something like an architect or a lawyer, they have to be historical interpreters in full period costuming or else run a model train store or something. In this case, Adams and Blunt go into business cleaning up fetid, blood-covered crime scenes and suicide sites, which probably sounds (and actually is) kind of gross. Their dad (Alan Arkin, uncharacteristically at a loss about how to play a part) also has his own indie-movie job: he’s a failed popcorn entrepreneur. Add a dash of liberal-lite social consciousness (pro-lesbian inflections and a strong if very formulaic “female empowerment” subtext) and then bake—or in this case, half-bake—until ready.

Jeffs has almost no flair for the type of movie she thinks she’s made here. If you’re going to show the audience close-ups of maggots and have characters vomit over the smells of the dead, the rhythms of a leaden family melodrama are not your friend. A truly ghastly and over-the-top sense of humor—like the kind shown in Tony Richardson’s cult comedy The Loved One —might have redeemed Sunshine Cleaning, or even a lyrical sense of irony, similar to Alan Ball’s TV series Six Feet Under. But Jeffs isn’t really interested in her most idiosyncratic idea— “biohazard removal” is just a vehicle to launch Adams and Blunt on a sitcom voyage of self-discovery, and so these two resourceful young performers spend their time getting weepy over the personal effects of their dead clients or consoling bereaved loved ones like a pair of freelance grief counselors. The maudlin touchy-feely-isms weigh down everything, and that means the maggots linger in the mind more than the mawkishness does.

From time to time, Sunshine Cleaning strains hard for “big” moments. These include a blatant rip-off of Bob Fosse’s Cabaret, with Blunt ritualistically screaming under a passing train to vent her frustrations with life, just as Liza Minelli’s Sally Bowles did in better company. In a truly charmless attempt at whimsy, Adams also gets to use an inoperative CB radio to hold a treacle-filled conversation with her character’s dead mother. There is no response. Despite Adams’ increased commercial wattage after Enchanted, this movie won’t get much of one either.