close
In directorial debut, Academy Award-winning writer Charlie Kaufman grapples with the burden of being labeled a ‘genius’ 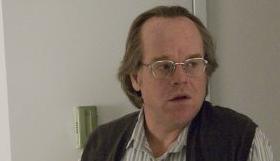 Two words: “head trip.” That’s what Synecdoche, New York is—not only in the way that Charlie Kaufman playfully layers real and surreal elements in his directorial debut, but also in the sense that this idiosyncratic chronicle of a frustrated dramatist’s attempt to live up to the label of “genius” delves deeply into the mental and emotional struggles of creators. Undeniably brilliant at times, Synecdoche, New York is also incredibly dense—to such a degree that it could conceivably increase box office prospects by virtually requiring repeat trips to the theatre in order to figure out what it all means, or even if all of it means something.

It’s a testament to the genius of the Academy Award-winning writer that Adaptation and Being John Malkovich are not known as “Spike Jonze films,” that Eternal Sunshine of the Spotless Mind and Human Nature are not known—if the latter is known at all—as “Michel Gondry films.” Despite the whimsical brilliance of their respective directors, they are known as “Charlie Kaufman films.” And, judging by Synecdoche, New York, either Kaufman has absorbed a great amount from his collaborators or he deserves some of the credit that has been given to Gondry and Jonze for the arresting imagery in those four films.

As inventive as they become, however, the visuals here start out as suitably drab—capturing the semi-squalor of the Schenectady domicile shared by regional theatre director Caden Cotard (Philip Seymour Hoffman) and his wife Adele Lack (Catherine Keener), who paints painstaking miniatures so small that they require magnifying glasses. Both depressed and depressing—his morning routine includes reading aloud obituaries and articles about the spread of deadly diseases—Caden is about to mount a production of Arthur Miller’s Death of a Salesman. Although the critics are suitably impressed, Adele is not. After skipping the opening night performance to get stoned with a gal pal, she announces that she is leaving for Berlin—where her work is about to be shown at a gallery—and taking their daughter with her. “We’ll talk when I get back,” she promises.

But she never comes back.

Miserable in his abandonment, Caden botches an affair with Hazel (Samantha Morton), a theatre employee who seems to actually appreciate him much more than Adele ever did. But then, in the depths of his despair, Caden is awarded a MacArthur Fellowship—the so-called “genius grant” that is intended to enable outstanding talents to pursue their own creative or intellectual inclinations. Convinced that a mysterious ailment is about to do him in, the fatalistic Caden uses his grant to rent out a cavernous warehouse in New York City in which he sets a cast and crew of hundreds, if not thousands, to work on creating a recreation of everyday life in the city outside.

“I won’t settle for anything less than the brutal truth,” Caden declares.

Well, here it is, then. Although he has scripted memorable moments and assembled a terrific cast that also includes Hope Davis, Emily Watson, Dianne Wiest and Michelle Williams, Kaufman is not fully successful in his attempt to provide audiences with decipherable directions to exactly where he wants them to go in Synecdoche, New York. His meanderings, however, are more memorable than most trips that unfold linearly.