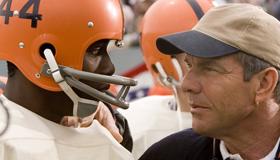 Few genres are as formulaic as the sports flick: you sweat, you lose, you win. It's the same template as the dozens of well-meaning period pictures about talented young minority musicians, debaters and athletes that get respectful reviews and vanish into the box office ether. But Gary Fleder’s biopic of running back Ernie Davis (AKA “The Elmira Express”) the first black Heisman Trophy winner, combines and surpasses both genres by virtue of its honest-to-gosh goodness. It’s a tearjerker, not an Oscar-winner, but the sizable chunk of parents likely to tote along the kids for a nice family day at the movies will find it well worth the price of popcorn.

Based on the Robert Gallagher biography, Charles Leavitt’s script opens in 1949 with 10-year-old Davis (Justin Martin) learning football maneuvers under fire from a gang of white boys out to bust his nose. The theme is constant—during college tryouts, he’s got to be twice as fast as everyone else, and on the Syracuse University field, he learns quickly to keep his mouth shut and his legs pumping. As an adult, Davis (Rob Brown) isn’t portrayed as a particularly political man—in fact, he’s not much of anything. He’s active, not introspective. “On the field, I only care about winning,” he tells a reporter, “But that doesn’t mean I don’t know the color of my skin.” When his childhood best friend tries to rally him to the NAACP, Davis’ first concern is his scholarship. When his tough-love coach (Dennis Quaid in a solid, unfurling performance) refuses to let him redeem himself against a racist team from West Virginia, Davis accuses him of not seeing him as a human, only tactics on a blackboard. It’s easy to make the same charge of Fleder’s film: Davis is a physically perfect saint. Towards the end of the film, he questions whether he lived a life outside the 100-yard perimeter. For the most part, here he doesn’t. His token girlfriend Sarah (Nicole Behaire) has more scenes watching her man on TV than talking to him.

But despite the clear weaknesses of Leavitt’s script, in the film’s second hour the mechanics of Davis’ life seize the heartstrings. Touring the south with Syracuse in 1959, he had the hurdle of representing integration—and domination—when hotels still had the option of refusing rooms to him and fellow black teammate Jack (the pillowy and always appealing Omar Benson Miller, who would star in Biggie Smalls’ biopic if there was any justice in the world). From there, in a reversal of the formula, things improve and then worsen. On The Express ’ IMDb page, some commenters are railing about the suspicious timing of a film about a black man overcoming obstacles a month before a certain man might win the presidency. (Never mind that the film was in pre-production months before he declared his candidacy.) If there was ever a sign that Davis’ story continues to deserve applause, that’s it.