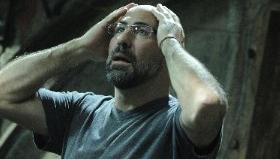 The only thing predictable about our current bipolar-disordered economy is that even a mediocre Saw picture should gross over $25 million on its opening weekend if it comes out just before Halloween. Saw V is mainly an origin story for the Jigsaw Killer’s latest acolyte, the vigilante detective Mark Hoffman. It also dovetails with previous entries enough to drain a few pints from the diehard fans, with a probable fast fade afterward. If the film doesn’t hit that very low mark, it might be time to pull whatever’s left out of the stock market, close out the bank account, and wait out the coming fiscal apocalypse atop a mattress stuffed with your life savings.

The fan base doesn’t go to these pictures to be ennobled, though. It goes to see a very raw and gory saga that crosses ’70s-era Death Wish vigilantism with contraption-based mutilation sequences—a kind of Rube Goldberg Grand Guignol, by way of Joe Friday. So the real questions for a Saw movie number just two: How good is it at doing what it’s designed to do (i.e., does it scare an audience and satisfy the fan-base)? And: What does the continuing success of this concept say about us, the contemporary audience?

To the first question, let us answer using Jigsaw’s methodology. If Saw V was a cunning trap designed to slice off an arm or a leg, the blades would turn out to be rubber, the locks holding the victim’s head and appendages in place could be picked by a sneezed nose-hair, and the gears wouldn’t fit together well enough to advance their purpose by anything more than a few ineffectual inches. In other words: it ain’t scary, folks. And this despite having the ritualistic flash-forward, flash-back, flash-sideways story structure that used to be a clever way of reflecting the underlying puzzle metaphor but now seems like a device to show either a bloody crime scene, still images of a bloody crime scene or the actual depiction of a bloody homicide every three minutes or so.

With their somnambulant and speechifying master villain, cliché hard guy cops, relentless self-seriousness, sprawling casts and meaningless plot complexities, the Saw pictures have always felt rhythmically like daytime soap operas, and while it might be fun to imagine Susan Lucci getting her hands cut off by a Craftsman bandsaw (perhaps in order to move to the next level of Dancing With the Stars ?), in practice, everything about the way this film plays seems to fight against the cheap thrills its supposed to supply.

As to what the Saw series tells us about the rest of us: if it were still three years ago, perhaps I could get my inner social worker to compose a little prose poem about a righteous, post-9/11 America willing to torture its enemies in the name of preserving its values. I admit it: the moralistic inquisitor Jigsaw has always seemed a bit like a demented staff sergeant from Abu Ghraib or Gitmo to me. But this late in the franchise, Jigsaw seems to want to teach people truly generic moral lessons—like that they should learn to work together and/or to trust each other—which is all a bit Thomas the Tank Engine for me. For good or ill, America seems to be ready to move on this election year, and the Saw premise is starting to hit its expiration date—the way Jason, who killed teenagers as they had sex, started to seem old hat as the anti-sensualist Moral Majority-types whose values he reflected began to leave the political stage back in the early ’90s.

But who knows—maybe Jigsaw has remained more relevant than he seems. On the day Saw V opened, Ashley Todd, a passionate 20-year-old supporter of the McCain/Palin ticket, was revealed as a hoaxer who had tried to put across a horrific story about a scary black mugger attacking her, all because she wanted to throw the election by playing to stereotypes of race. Her weapon of choice: self-mutilation.

Like Jigsaw, Todd almost surely felt her cause was just. Or maybe she’d just seen too many movies.