The Other End of the Line 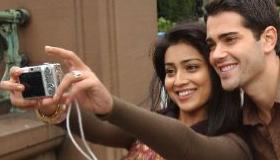 Sure, globalization’s been hell on the economy, but at least as capitalism’s horizon expands. So too do our options for romantic comedy meet-cutes, which have grown exponentially from The Shop Around the Corner to Sleepless in Seattle to James Dodson’s slight and pleasant charmer about a New York advertising man named Granger Woodruff (Jesse Metcalf) who falls for his credit-card customer service agent. The twist is she’s not Jennifer David from San Francisco, as she claims, but Priya Sethi (Shriya Saran) from Mumbai, who’s undergone rigorous training to perfect a WASP accent and master the difference between Dylan McDermott and Dermot Mulroney. With a broad external, if not internal, scope layered over a thoroughly mediocre boy-meets/boy-loses/boy-gets plotline, this middling romance deserves better than its underwhelming and un-promoted U.S. distribution, which seems to hint that MGM is banking the film’s success on the international market—another huzzah for commerce without borders.

The smartest scenes in Tracey Jackson’s script take place in India, where overachiever Priya calmly schools her best friend Zia (Tara Sharma) and parents on the merits of corporate work. Zia is irritated that she’s forced to answer calls from New Jersey (“Everyone starts in New Jersey and works their way up,” their boss scolds) and Priya’s dad Rajeev (Anupan Kapur), an insurance salesman, is quietly frustrated that his daughter is outearning him. In a sweet moment, Priya convinces her dad that it’s okay if she buys her own wedding sari, and Kapur’s face flickers between sadness, resentment and pride. The very nature of Priya’s workplace deception hints at a xenophobia that director Dodson would rather not name—he’s interested in reaching across cultural differences, not confronting them. Confrontation and triumph would make a more interesting film, but when Priya flies to America to see if her whitebread hunk will fall for the real her, the hurdles they must overcome are all forced misunderstandings with little ties to the story’s hook. A last-minute attempt to acknowledge bigotry when Granger’s ex-girlfriend (Sara Foster) mistakes his new lady friend for a maid feels labored, especially because the lovely Priya is covered head to toe in rhinestones.

But at its simplest level, this is a sweet, if forgettable trifle starring two healthy, bright-eyed young lovers who look great on each other’s arm. Metcalf’s is a good-natured hunk with a fat wallet who buys his mom pastries when she’s having a tough day. He’s at once rare and bland, a perfect Ken doll with a lot of charm. Saran, making her Hollywood debut, has 28 Bollywood pictures under her bejeweled belt. She’s gorgeous and a surprisingly decent comedienne—her apple-pie-American accent is spot-on hilarious and she slips in and out of it with ease. Even if our next president succeeds in reducing outsourced jobs, I’d like to keep her.