close
Haring was great, and NYC was better in the ’80s. We know, already!

The Universe of Keith Haring 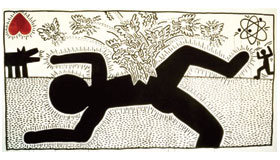 While not inconsistent in its aesthetic ambitions, Cristina Clausen’s The Universe of Keith Haring is somewhat ham-fisted in plowing the already well-worn path of the ’80s NYC art scene. The film’s specific interest in the work and life of Keith Haring feels, at times, like an excuse for gaining access to the movers and shakers of the day. Still, an affectionate tack is taken exploring the work of this pop icon, his perpetual production of art/product and his warm personal life. Though numbers for this documentary won’t break records, it could find itself a comfortable home in the educational circuit, and in theatres could easily attract a few more than just the patrons who hold dear their “Radiant Baby” T-shirts.

Comprised mostly of archival footage of Haring and present-day interviews with friends of the now-deceased artist, Clausen’s doc proves, as many other docs have proven before, that NYC in the ’80s was rife with enterprising spirit and young artistic talent. While there’s no crime in replaying the highlights of a golden era, it does seem crucial that any exploring filmmaker find a new tack to take. Sadly, it’s hard to say Clausen’s done anything original here. Moreover, the filmmaker’s attempt to create new aesthetic conventions reduces what could have been a style into a kind of low-end parlance. Her collection of interviews, for example, is stellar (Kenny Scharf, David LaChapelle, Haring’s family, even Yoko Ono, who seems a random addition given she didn’t seem to be a major player in Haring’s Universe ). However, each interviewee is introduced with a photographic convention that mimicks a camera’s flash, but in red. As the list of interviewees was long, whatever convention the filmmaker chose needed to be palatable for heavy replay. Sadly, the red flashbulb was unappealing the first time it showed.

The film clearly engendered the support of Haring’s personal and professional associations: the sheer number of people in the film is proof of that. Filling in the empty spaces is footage from previously-produced docs on NYC in the ’80s as well as a myriad of experimental films made by Haring himself. Attention is paid to the personal politics that Haring put into his earlier works and grateful time is given to the issue of art versus commerce as it was equally tackled and joyously exploited by Haring’s work (his Macy’s shirts and AIDS awareness media are testament).

Ultimately, The Universe of Keith Haring is a sincere and warmhearted essay on the intersection between Haring’s personal and professional worlds, but its disinterest in mining that connection for more resonant value and its odd avoidance of developing an aesthetic presence of its own make the film a strange companion to the work of a venerable and (both artistically and commercially) complicated icon. Then again, perhaps Clausen is stepping up to the plate; presenting the icon as character, and emulating the broad-stroke graffiti figures in her own broad-stroke encapsulation of Haring’s short but storied life. Even if this (mild) extrapolation were true, it’s hard to see this film making it anywhere but TV, where it too could run alongside ads for Macy’s 150th and the many products that, while now almost derivative, were the result of Haring’s Midas touch.