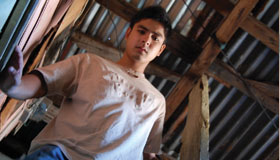 Any survey of contemporary Asian cinema should include a taste of Filipino Brillante Mendoza’s work. Tirador (English title Slingshot ), one of three features he completed in 2007, will do just fine. The kinetic plunge into the slums of Manila can be read as a tune up for his most recent film Serbis ( Service ), seen at this year’s Cannes and New York film fests and slated for release in 2009. Both movies revel in the squalor and minor corruptions of everyday life, evoking a sense of place more than individual or national character and unquestionably more than plot. Whereas Serbis has secured a distributor, the only foreseeable chance to view Tirador in a theatrical setting will be during a weeklong run at Manhattan’s Museum of Modern Art.

Tirador opens with a nighttime raid on a fetid slum in the district of Quiapo. The cops roust a swarm of humanity. Many people are arrested and a politician bails them out the next morning. It’s election season and all he asks in return is that they vote for him. The slum they call home is a warren of stacked cubicles and narrow alleyways alongside putrid canals. It’s so hot that the residents—a collection of cheery drug addicts, criminals and struggling families—are more often seen in their underwear than fully clothed. The three Gs of God, gambling and graft pretty well sum up their collective, hardscrabble existence.

There’s the petty thief who prays in church for his lottery numbers to hit and is later trampled during a religious procession. After a nasty fight with his stepfather, a young pedicab operator two months behind on payments on his cab resorts to purse snatching. And a couple with a baby shoplift to fund the father’s drug habit and the mother’s need for dentures, a brand new set of which she accidentally drops into the open sewer. The final set of characters is a self-styled gang of teenage punks who grab a kid off the streets, take him into the mall and part him from his valuables. One of them is caught and brutalized by a cop, but even that painful experience doesn’t deter him from his thuggish, pilfering ways. In the movie’s final scenes, politicians hand out cash for votes and then spout noble rhetoric at a candidate’s forum. A pickpocket goes to work in the crowd at a candlelight vigil.

While the people and the politicians aren’t troubled by any dissonance between their rhetoric and behavior, Mendoza points his finger at the system that tolerates such hypocrisy, in particular the conflict between society’s religious underpinnings and the way people are forced to live. Without judging or ranking the individuals he spotlights, his realistic/pessimistic exposé condemns from inside their ranks. As one of the four credited cinematographers armed with digital cameras, Mendoza clearly relishes immersing the audience in an uncomfortable, unpredictable environment and in pulling-off logistically taxing and beautifully claustrophobic shots.

Tirador ’s frenetic style and locale will remind many viewers of Fernando Meirelles’ much-admired City of God. It also bears comparison with how Mexican filmmaker Carlos Reygadas explores similar themes in his three films, particularly the 2005 psychodrama Battle in Heaven. In that movie, a middle-aged man in an overwhelmingly Catholic milieu commits ugly transgressions that spur a belated search for personal redemption through ritual. In Tirador, matters of conscience are superseded by necessities; religious practices and symbols exist to take care of any niggling moral questions. A gap between daily behavior and faith tenets is tolerable, since survival is the only form of absolution and salvation these souls must worry about.

Mendoza’s means of pricking the conscience of society is to show how the sacred and the profane intermingle rather than how they diverge. The problem then becomes there’s little hope of healing or progress on a mass level. In the universe Reygadas creates, the individual sinner can be saved. In Mendoza’s, there’s no need to bother with one sinner when everyone is being flung to hell in the same grimy hand basket.