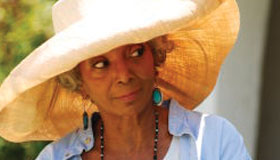 Tru (Najarra Townsend) is a high-school-aged girl with two mommies who relocates from the open-minded environs of San Francisco to the burbs of Anywhere, America, where she finds herself subject to the sort of innuendo one might expect. She quickly takes up with the school’s star quarterback, a kid named Lodell (Matthew Thompson), whom she pretty quickly clocks as just about the gayest boy she’s ever met. Unless you have no gaydar at all, you know this, too. This does not make you a bad person and is in fact the second problem with Tru Loved. Every gay person in the film, whether portraying a straight person, or a gay person pretending to be straight, is nevertheless plainly gay. Which severely undermines the film’s goals. Thus we see the film’s first problem: its goals. The film has a lot of them, and they’re all directed at making us better people. This, frankly, is irritating and won’t work. Which means Tru Loved will have a limited audience, none of whom will be its intended audience of high-school-aged homophobes, who’ll likely just see The Dark Knight for the fifth time, (which, ironically, is incredibly gay).

The hook in Tru Loved is that Lodell is a football star and African American, as well as a closeted homosexual. All of which is pretty interesting when one considers the deeply-seated issues both athletes and black kids have individually when they’re gay. Combine those issues and it’s big drama  but not in this movie, which is likely because of the third problem with Tru Loved : the writing and acting, which is wretched—across the board. Every word of dialogue is both written and delivered with the most precious deliberateness and instructive tone. This is terrible, especially given the fairly notable quasi-name cast, which includes a number of people we will not list here, because that would be rude, since they’re all so bad in this movie.

They are, however, listed below.