close
Think makes for a compelling doc about motherhood and art

Who Does She Think She Is? 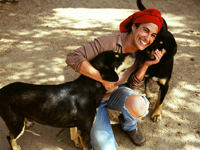 Barriers preventing American women from freely moving between motherhood and (monetarily) gainful employment outside the home have been torn down or at least weakened in recent decades. According to filmmaker Pamela Tanner Boll, the same is not true of mothers who are also professional artists. Her lively and informative documentary makes an estimable contribution to the field of gender studies by arguing that motherhood and art shouldn’t be seen as mutually exclusive. While it’s not in any danger of becoming a smash hit as a date movie, husbands, boyfriends and significant others can curry favor by bringing their female partners to see Who Does She Think She Is?, provided they realize it’s no substitute for supporting their partners in their endeavors, artistic and otherwise—by which I mean carrying one’s fair share of the domestic load.

Another way to frame the topic is to ask someone to name the great female artists in the history of western civilization, as director Tanner Boll does in the film. Sadly, it’s a short list, and a lack of talent or natural inferiorities can’t be the explanation. The fact remains, most of those who appear on it did not have children. It must be a question of opportunity and social constructs, of how our society organizes gender roles and relationships.

We’re told that whereas men worshipped women 3,000 years ago, when patriarchy took hold, women were domesticated and excluded from the worlds of art, ideas and creativity. Over the last century or so, women were finally valued when they successfully ventured outside the “nurturing mother box” into the male domains of commerce and industry. In other words, it was all right for Mrs. Cleaver to trade her apron for a workplace pantsuit, but heaven forbid she donned a painter’s smock when the Beav and Wally left for school.

After a frenetic introduction that makes use of ancient sculptures and paintings loaded with mammary images, five mother/artists are profiled. Maye Torres of Taos, N.M., has three sons and works in multiple mediums—paper, metal and clay. Janis Wunderlich, a Mormon mother of five from Ohio, finds time to sculpt her unique pieces, mostly mother figures, in between childcare duties and carpooling. Japanese-born Mayumi Oda is a printmaker who focuses on goddess imagery and has founded a retreat center in Hawaii. Camille Musser of Cambridge, Mass., started painting seriously after raising her family and has started an arts camp for children on her native island of St. Vincent’s in the Caribbean. And Angela Williams is a pastor and mother of two teen girls in Providence, R.I., who felt the call to pursue a career as a singer and actor at age 30.

The movie does a thorough job of linking the women’s personal histories to their artistic creations. Their work gives the film visual variety, and commentary by informative academics and authors provides context. Pertinent issues discussed include whether their art is viewed as a hobby or a profession; the difficulties of promotion and marketing; and the prevalence of institutionalized sexism in the art world, which is described as just as much of a boy’s club as finance or business. Without ever losing sight of the joys and satisfactions, the movie’s last third hones in on some of the sacrifices the women have made and the toll this has taken on their relationships.

Spunky would be a patronizing description of this film. The subject is huge and the issues complex, but indeed everything we see and hear is on point and forcefully presented. As Torres observes, “Art is always a risk,” and it seems hard to dispute the proposition that women are less likely to be encouraged to take risks in our culture than men are. Who Does She Think She Is? could go some way toward changing that.