close
It's no Outback Titanic... 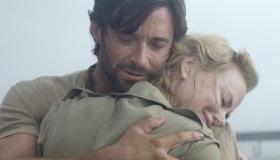 There’s something almost deliciously audacious in naming a film after an entire continent—it conjures up an intoxicating sense of majesty and scale, the kind of sprawling, romantic epic that movie studios simply don’t bother making any more. Normally, this would be ripe territory for a nostalgia-kitsch auteur like Baz Luhrmann, whose passion for splattering his passions across the screen in such operatic indulgences as William Shakespeare’s Romeo+Juliet and Moulin Rouge would surely be multiplied tenfold if the subject were his native land. Normally. But Australia is anything but a normal film.

Undeniably ambitious, unabashedly melodramatic, unyieldingly Baz in every conceivable way, this costly, much-troubled, forever-in-production epic nonetheless falls short of its lofty ambitions; undone by an unfortunate combination of hubris, predictable studio meddling and fate. That’s not to say the film won’t have its admirers—there’s plenty to relish and enjoy in the nearly three-hour opus—but distributor 20th Century Fox’s hopes for an Outback Titanic should fall precipitously back to earth after second weekend word-of-mouth catches up with the hype.

It’s a particularly bad sign, in fact, when a film begins with a spoiler, the usual “historical backdrop” crawl going the extra step of telling audiences precisely where it’s all headed. That’s one thing if it’s the most famous maritime disaster in history but entirely another when the event in question is both little-known (outside Australia) and, in the overall dramatic context of the film, of relatively little importance. Nonetheless, audiences are immediately informed of the tragic events that befell the Australian port city of Darwin in the wake of Pearl Harbor, a similarly brutal Japanese attack that all but leveled the city and decimated its population.

With that anticlimactic detail now firmly embedded in viewers’ heads, Australia flashes back to that rosier time just a few years prior, when men and women of sturdy constitution lived an unmolested frontier lifestyle amid the pastoral beauty of a mystical land. The dirty little open secret tainting this backwater paradise is the longstanding government practice—detailed more seriously in Philip Noyce’s Rabbit-Proof Fence —of removing mixed race Aboriginal children from their families and placing them in the foster care of whites.

Not that any of this is even the least bit on the mind of Lady Sarah Ashley (Nicole Kidman), a proper Englishwoman who has made the long trek from the North Atlantic to the edge of the South Pacific to find out just what the devil her scoundrel of an absentee husband has been up to on their Down Under cattle ranch, Faraway Downs. What she finds instead is a dead husband, reportedly murdered by a local aboriginal magic man known as King George (David Gulpilil), and a ranch that is quite near total ruin. The source of the ruin—and quite likely the key to her husband’s death as well—appears to have less to do with the hardship of Australian life than the greed of monopolistic cattle baron King Carney (Bryan Brown) and a the treacherous station manager named Neil Fletcher (David Wenham) he has placed as his inside man at Faraway Downs.

To resurrect the ranch and beat Carney and Fletcher at their own game, Lady Ashley will need someone rugged, someone extraordinary, someone sweaty, hairy and manly with a Hugh Jackman-like square jaw, broad shoulders and throbbing pectorals—the kind of man who would star in a movie opposite Nicole Kidman if Russell Crowe had dropped out. A man just like well, Hugh Jackman.

Though undeniably charming, Jackman’s itinerant cattle man Drover isn’t a terribly original archetype—like Humphrey Bogart’s Charlie Allnut in The African Queen and Michael Douglas’ Jack Colton in Romancing the Stone, he’s the frontier spit to a city woman’s polish, the diamond in the rough who puts the bloom into a lovelorn woman’s wilted soul—among other silly analogies and mixed metaphors. And when the two of them get together, by golly, they’re an unstoppable force of nature!

What has yet to be discussed here is the film’s narrator—a mixed-race Aboriginal boy named Nullah (Brandon Walters) whose mother works as a servant at Faraway Downs. Always at risk of being taken away by the authorities, Nullah serves the dual purpose of providing the film a kind of Greek Chorus while validating its cultural soul. Simply put, it’s okay to root for white colonials if an indigenous child this beautiful and this beguiling loves them, too.

As the years roll by and World War II moves to the fore, it becomes clear that Luhrmann is aiming higher than he ought. The African Queen, Places in the Heart, Out of Africa and Doctor Zhivago as well as the 1948 Howard Hawks/John Wayne cattle opus Red River, all figure into the potpourri he desperately hopes will become the movie to forever define what it means to be Australian. Unfortunately, the result is more about what it means to be Baz. Luhrmann’s retro-art fetish and love of theatrical artifice are more subdued than in previous films, but still unmistakably present. Liberal use of CGI is well-integrated, as it was in Moulin Rouge, but ends up unduly distracting from Mandy Walker’s otherwise mesmerizing cinematography of Australia’s unique natural beauty.

Even still, whether or not Luhrmann’s aesthetic sensibilities were the right fit for a story of this type—and it appears they weren’t—the greater problem centers on the story itself, which aspires far too hungrily to be compared to great screen romances of the past to ever take on a life of its own. Nearly everything here feels derivative, like a flashy touristic bauble, a souvenir replica of the real thing. It’s a magnificent fraud, but a fraud just the same.

Just how much of this is the result of studio meddling one can only guess —Fox’s reported insistence that Luhrmann change the downer ending to something more upbeat is only one apparent point of interference and probably the least objectionable. That even the film’s harsher moments feel sanitized for the sake of a PG-13 rating is indicative of the more stifling contractual restraints with which studios now routinely blunt even the dullest narrative edge.

Nevertheless, Australia is not a complete failure. Though it repeatedly falls short of its lofty aspirations, audiences with appropriately tempered expectations will find much to enjoy. Beyond a clunky and often embarrassingly corny setup, the film eventually settles in with a steady tone and pace, yielding enough honest moments to at least draw even with the missteps.

To some, it may seem a spectacular sin to spend so much money and effort on a film of such little ultimate consequence. But if movies themselves are an art form of little consequence—which they are—then Baz’ worst sin here is to have attempted tackling a film ill-suited to bringing out the best in him. Whatever the film’s demerits—or Luhrmann’s—they’re a small thing compared to the countless Hollywood studio films of far greater expense which fail so routinely that they scarcely even appear on the public radar. That so much attention, both positive and negative, has already been lavished on Luhrmann’s effort suggests that this magnificently messy epic, despite all appearances, may yet have its day.