close
A slow start leads to shock and awe 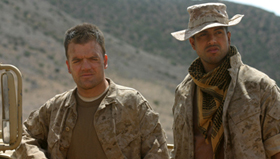 Military types will recognize the nomenclature that the title of this film denotes right away; BOHICA stands for “Bend Over Here It Comes Again.” It’s an acronym not unlike its more well known cousin, SNAFU, which, when reconstructed into its representational phrase, ironically contains the explicative that is likely to occur in a BOHICA situation. The film is effectively a character piece about the lives and collective musings of four soldiers in a remote Afghan post who guard a transmission tower. Though much of BOHICA is akin to one contemplating ones own navel (on an existential level), it has its legitimate moments of profundity. Indeed, sometimes it’s so profound—it hurts. Films about the current wars, no matter the context, make no money, because most Americans are content with pretending that the current wars don’t exist and thus ignore the movies about them. There’s a thoughtful commentary in BOHICA regarding our American ability to ignore the things we don’t want to see, but alas, most Americans won’t see it.

The isolation of the four soldiers (Joshua Coelman, Matthew Del Negro, Nicholas Gonzalez, Jaime McAdams) is broken when two wayward Marines stumble into their camp. Diz (Adam Rodriguez) and Nasty (Kevin Weisman) impose themselves on the Dogfaces in standard Jarhead fashion, and before you know it they’re all smoking pot and drinking heavily—and the Marines start telling stories about the young girl they just raped and the family they slaughtered. Yes. Then the war comes to the movie and the navel watching stops.

BOHICA slips into both didacticism and stage acting on a few occasions, but it never really grates. The conversations are no dumber than actual conversations about God, Politics and the other “P” word, particularly when between people of vastly different backgrounds and intelligence. Director D.J. Paul certainly studied all the right reference films, modes from M.A.S.H to Platoon and Full Metal Jacket all make appearances; Matthew Del Negro’s Lt. Busche is wonderfully Hawkeye and un-expectantly brave.