close
Bolt is bound to be a holiday hit 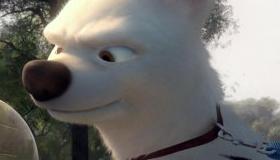 Jumping smack into the digital 3D animation revolution, Disney serves up a charming holiday treat in Bolt, an action and humor filled story about a TV super star dog who discovers his “powers” aren’t real when he accidentally winds up in New York City and must begin a cross country journey to get back to his owner/co-star, Penny. With several engagements set for digitally equipped screens along with regular runs, Bolt could become the litmus test for the near-term viability of the debuting Disney Digital 3D process. No matter which format rules at the box office, the studio should back up the brinks trucks for a large holiday haul.

Exceptional voice casting and a clever story distinguishes this delightful entry from the reemerging Walt Disney Animation Studios, now also under the guidance of Pixar’s John Lasseter. Toplining John Travolta as TV action pooch and superhot Miley Cyrus as his series co-star and master, Penny, the story centers on Bolt’s reality check when he is inadvertently sent from his Hollywood soundstage to the Big Apple. Alone and not able to understand why he has been separated from Penny, he sets out on a journey across America to get back to L.A. Unfortunately he is also delusional and really believes he possesses the superpowers of his small screen alter ego. Along the way he hooks up with two traveling companions, abandoned house pet, Mittens, (voiced by Susie Essman) and a TV groupie hamster, Rhino, (Mark Walton) who travels around in a bubble.

Voiceover work is exceptional all around with an appealing turn by Travolta as the superstar pup who blurs the line between reality and acting, and Cyrus, who is alternately devastated and concerned about the sudden disappearance of her best friend and meal ticket. Best of all though is Curb Your Enthusiasm’s Susie Essman, touching and uncomfortably honest in her exchanges with Bolt and Greg Germann ( Ally McBeal ), who is hysterically funny as Penny’s opportunistic and less than diplomatic agent. There’s also some amusing work from Walton as the TV-obsessed hamster, Rhino, who thinks everything on the tube is real and an inspired bit by Inside The Actor’s Studio ’s James Lipton as Bolt’s director.

The 3D animation is first rate, particularly in the early action scenes shot for Bolt’s series. Disney vets Chris Williams and Byron Howard make an impressive directorial debut charged with the tricky task of making the film work just as well for audiences who will not be seeing it with glasses. Animation is sharp and state-of-the-art marking a welcome return to form for the Disney toon label, which in recent years has stood in the shadow of upstart, Pixar. Lasseter’s influence as head of both Pixar (and now Disney) Animation is clearly felt, not only in the look of the film but also in the strong story and dialogue elements.

Two country-flavored tunes, “Barking At The Moon” and “I Thought I Lost You” (co-written by Cyrus and performed with Travolta) add nicely to the flavor of this sparkling holiday treat.