close
Celebrities line up for a righteous PSA 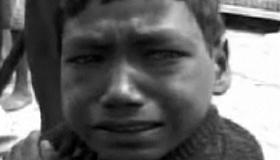 Every few weeks, it seems there’s a new horror flick out that promises to spook you senseless—whether by way of sadistic, dungeon-bound torture, or a predatory bug certain to wipe out scores. But terror is no farther away than a massage parlor or noodle shop next door, where, behind closed doors, the hallmarks of human trafficking and slavery are the catch de jour. Here, you have to credit a breed of filmmaking that demands more than your attention—it demands action. Call + Response taps the talents of various minds, celebrities and musical acts already mobilized, and when on-camera, these personalities issue a rallying cry to put an end to this global ignominy. Downside is, it washes down more like an extended public service announcement than a compelling feature. Still, Call + Response is set on inspiring folks who will get motivated to do something Samaritan-like—something beyond tossing a dime instead of a nickel to their corner hobo.

Northern California musician and filmmaker Justin Dillon said he got wind of the human-trade enterprise while touring in Russia. There he met a naïve girl who was America-bound for shady reasons. Once back stateside, Dillon studied up on the scale of the slave trade and came up with the prospect to host a concert—captured on film—where a bunch of musicians could perform for free to create awareness. But while the gig was forming, he began to take meetings with heavy hitters in the field such as former U.S. Secretary of State Madeleine Albright, New York Times reporter Nicholas Kristof and Princeton University professor Cornel West. Celebrities tied to the cause also filed in, including Ashley Judd, Julia Ormond and Daryl Hannah. What you have then is an undressed set where musicians play a couple of tunes and then sandwich it all with some spy footage and Q&A chitchats with notables and authorities.

There’s not a lot of method to the movie’s structure. There are some superb musical performances (namely by Matisyahu, Imogen Heap, and Talib Kweli), while some others could have been saved for the soundtrack instead of clogging the film up. Let’s face it: some of the bands just don’t measure up. But you’re forced to watch a couple-minutes-long video, shot in black-and-white and washed-out. Looks nice. Sounds all right.

The musician-gone-filmmaker/activist gets into the thick of this issue, and you cross into new territory by talking to escapees and survivors. He catches up with an Asian woman who looks to be in her late 20s. She braved the camera to talk about the inhumanity she endured for over six years, sorrowfully acknowledging she slept with more than 1,000 men annually. Uneducated, she admits she doesn’t know the sum. “I have never been to school, so I can’t add it up.”

Then come the testimonials from Ashley Judd and Julia Ormond, who—each in their own right—are astute and mad as hell; each is sincerely committed to mitigating the slave trade. Judd quips, “I don’t want to wear someone else’s despair. I don’t want eat someone else’s tragedy.” You buy it, and perhaps you’ll look closer at how you fill your shopping bags or coffee mug at your next point of purchase. And spliced in between is a standup with West, who links spirituals, blues, jazz and hip-hop to a revolt against slavery in the United States. His diatribe gets saucy when he discusses how all human beings fear becoming insignificant and, ultimately, becoming extinct.

However tangential some of monologues become, the headings share a common gene—the human trafficking crisis can be defeated and the element of song is the medium to force the issue. Still, this works as a PSA, but as a film (despite all the footage of youths forced into labor, or to become marauders in Liberia or Rwanda), you aren’t necessarily swept up in the march and fail to feel that uncanny something before your eyes. There’s an epidemic amongst us, and it goes hand-in-hand with drugs and weapons.

However fair or unfair the terms, when weighing the merits of a film and simultaneously acknowledging the subject matter as worthwhile, this is no time to play suck up. The piece is well-executed, and compiles some strong takes from folks that are calling out modern-day slavery and are determined to topple its infrastructure. As an effort to inspire young couch potatoes blistering their fingers on video games, the film has its place. For a film that is trying to break through with material to captivate and move—the tank is half-empty. All in all, it’s a noble cause and a noble effort.