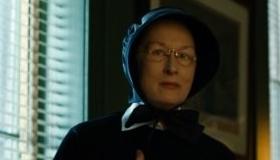 Word-drunk and fueled equally by anger and compassion, writer-director John Patrick Shanley’s Doubt is a terrific and troubling drama of ideas bristling with nuance and grief. Instantly a leading contender for some of the year's biggest acting prizes, the film may have limited appeal for those who mistakenly think movies are exclusively about imagery and action, rather than intricate dialogue and complex characters. The arthouse audience could initially split over Doubt ’s lyrical density and dramatic ambiguities, but the strong likelihood of multiple Oscar nominations should ensure a decent run and an overall solid commercial response.

Although it began life as a celebrated stageplay (Shanley’s primary and most prolific career is in the theatre), Doubt is actually closest in spirit to 5 Corners, Shanley's first movie script from 1987. In that startling but forgotten magic-realist rumination on anarchy and youth, a loosely-connected group of Bronx teenagers spend a long autumn night in 1964 enacting an ensemble bildungsroman, while the mad and remorseless maelstrom of “The Sixties” gathers force just outside the frame like something hungry and alive. Doubt is set in 1964 too, also in the Bronx, also in autumn, and it similarly concerns a milieu that gains in poignancy from our awareness of something the characters don’t know, which is that everything they hold close is about to be torn away from them by an accelerating world. The ensemble here is one of priests and nuns—characters who could have stared across altars and desks at the children in Shanley’s earlier screenplay—and their ecclesiastical certitudes are made simultaneously more rigid and more frail by the rulebound and dogmatic nature of their religious service.

The radical changes of the Sixties came early to Catholicism. The Second Vatican Council, which convened in 1962 and closed in 1965, brought an unprecedented liberalizing spirit into the Church, an Indian summer long since rescinded by the combined conservative papacies of John Paul II and Benedict XVI. In Doubt, Father Flynn (Philip Seymour Hoffman) incarnates the Church’s momentary shift toward tolerance and modernity. He smokes and drinks and tells questionable jokes, and seems alive to whole realms of carnal, sensual and political experience earlier adherents to his calling might have rejected outright. Father Flynn is a fresh wind in an airless room, and many of his parishioners, especially the youngest among them, respond to him with bemusement and even love.

This puts Flynn into diametric opposition with Sister Aloysius (Meryl Streep), an unrepentant disciplinarian and the principal of the parish grade school, who convinces herself there may be something not quite right in Flynn’s affection for the boys in her charge. The sister’s suspicions are communicated to novice teacher Sister James (a suitably wan and milky Amy Adams). When an incident involving Father Flynn and a lone and vulnerable eighth grader (Joseph Foster) seems to confirm Sister Aloysius’ deepest fears, all four characters are hurled into a new context of half-certainties and irresolution—a gray and smudged charcoal sketch suddenly imposed over a world they took for black and white.

There will be no better performances given in an American film this year than Meryl Streep as Sister Aloysius or Viola Davis as Mrs. Muller, mother to the boy who may have had inappropriate contact with Father Flynn. The single scene between these two actors encapsulates everything that’s great about this movie, with Sister Aloysius’ intractable rectitude suddenly confronted by the despair, compromises and mixed motives of a true flesh and blood human being. Streep, who built her career on mannerist character turns, seems to grow more supple and believable with each passing year. Her aging nun is a kind of sympathetic aria to a vanished era of certainty, embodied in a woman whose kindness is as undeniable and reflexive as her disapproval for all the meaningless conveniences of contemporary life. Watching her certitude erode is in some ways watching a piece of machinery come to life.

Davis, a great stage actress and a virtual unknown to filmgoers, can break the viewer’s heart with the simple dignity of the way she wears her dented Jackie O pillbox hat. Her battered and desperate Mrs. Muller is such a quicksilver blending of fatalism and denial, aspiration and suppressed rage that she splutters in the mind like a fuse sliding toward detonation long after the actress herself has vanished from the screen. As Pastor Flynn, the very fine Hoffman is perhaps a less felicitous choice, for it upsets Shanley's careful textual equivalencies to have such a humid and fulsome actor—a stereotypical heavy, despite his capacity—playing a priest who ought to seem on the surface nearly as innocuous as the Bing Crosby of Going My Way.

In its previous incarnation as a Pultizer-winning play, Doubt was frequently seen as a reaction to the vast molestation scandal engulfing the Catholic Church in the first years of the 21st century. The unvarnished evil of child abuse is certainly a central subtext in this picture—a spreading stain from an unseen source, undermining the characters’ trust in institutionalized sanctimony, perhaps even in the idea of God itself. It’s a measure of Shanley’s precision though that he can address this critical and explosive issue as a sidebar while leaving his central conflict disturbingly unresolved and subtly expressed.

For ultimately, Doubt is not primarily a movie about a hot button topic but rather an existential morality play, an unblinking vision of the remorseless formlessness of life as it’s actually lived, and a comment on the potential futility in trying to impose moral clarity and unambiguous order on the murk of human motives and behavior. Within the popcorn sanctimony of the American screen, it’s a rare movie that’s willing to ask such fundamental questions about what exactly goodness is, and a rarer film still that's willing to compliment it’s audience by leaving so much for the viewer to decide.