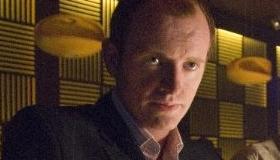 Fine acting but not much else distinguishes this intimate Irish film. Breda (Eileen Walsh) and Billy (Aidan Kelly) are in a seemingly happy, decade long marriage. As their tenth anniversary arrives, the strain of their union starts to show as their wedded bliss goes south. Low key filmmaking style and unfamiliar star names will probably hamper any rush to the box office making it unlikely Eden will follow in the same footsteps as last year’s other “small” Irish movie, Once (coincidentally also Produced by David Collins). Expect modest results from limited arthouse runs followed by a lonely life on the Netflix shelves.

Neither Breda nor Billy can remember the last time they had sex and that is partially due to the fact that Billy is going thru a mid-life crisis and becoming infatuated with Imelda Egan (Sarah Greene), the much younger daughter of one of his mates. The wife suspects this and tries to engage him by suggesting they recreate an early date for their anniversary by going out with friends and meeting later at a pub. Everything unravels as Billy gets drunk and Breda finds a romantic distraction of her own.

Eden is a small drama about the difficulties of keeping heat in a relationship. For as reasonable a subject as this is the relationship (and the story) becomes baffling when Billy proves himself to be such a thoughtless boob it’s hard to imagine why Breda has stayed with him as long as she has. Her attempts to keep their marriage from falling apart seem contrived and endless even though the film runs only a relatively brief 84 minutes.

Saving the film are two top-notch lead performances, particularly the performance given by Walsh who won Best Actress at the Tribeca Film Festival for this role. You understand her heartache and frustration in trying to deal with a husband with whom she obviously once shared a nice relationship. Unfortunately he’s gone so far off the deep end that it seems her efforts to pick up the pieces and put them all back together is just a waste of time. To his credit, Kelly seems to get the kind of guy he’s playing and does try to make him empathetic, but his actions, particularly at the pub where they both wind up on their anniversary, negate any positive feelings the audience may have built up for him. Their final scenes do have a touching and poignant quality to them but the film leaves us with a bittersweet aftertaste.

The stage bound feeling here is understandable considering it was adapted for the screen by Eugene O’Brien from his own play. Director Declan Recks has not done much to open things up, making the whole enterprise feel claustrophobic at times.

Despite the fine performances, it might have been a better idea just to leave this one to the theatre where it was probably better suited.