close
Vaughn and Witherspoon are a fine comedic pairing 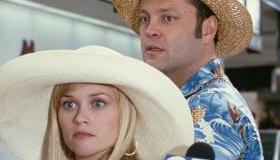 Vince Vaughn and Reese Witherspoon—America's Lothario and America's Sweetheart—are an oddly apt pairing in Seth Gordon's middleweight comedy about a supposedly rock-solid couple undermined by a day with their families. As the biggest romantic comedy debut in months, Four Christmases is poised to rake in the lets-take-grandma-to-the-movies holiday cash, and its appealing trailer has guys secretly hoping their women will drag them along.

Witherspoon stands 5'2"; she barely reaches Vaughn's elbow. But in their first scene she sets her Tracy Flick jaw and tears a too-hesitant Vaughn into bite-sized pieces. It's a seduction game, but the intent is to prove the giant and the pixie are equally matched. Which is ideal in the first act when they're charging through life together like two headstrong bulls. Vaughn and Witherspoon are that smug city couple who knows everyone else is doing it wrong. An engaged couple in their ballroom dance class find themselves on the receiving end of their chirpy argument against the responsible breeder route of marriage and babies. That couple must hate them—we would, a little—if it weren’t for the way Vaughn lovingly, unknowingly plays with Witherspoon's ponytail. (Even worse for everyone else's romantic self-esteem, they're taking the class simply because they love doing everything together.)

Flying to Fiji for Christmas instead of clocking time with their four sets of estranged parents (instead of volunteering in Burma, their given excuse), the couple is ratted out by network TV when all flights are canceled. We've enjoyed their cocky selfishness; just as much, we bask in schadenfreude when they get guilted into making the familial trail of tears. But too soon, Matt Allen, Caleb Wilson, Jon Lucas and Matt Moore's script pressures us to be with them, not against them. Sympathy sucks the poisonous fun from the comedy's redemptive last stretch. The early visits have a wicked glimmer—their first visit with Vaughn's dad (Robert Duvall) is a riot. Jon Favreau and Tim McGraw play Vaughn's short, powerhouse brothers Denver and Dallas—bottom tier UFC fighters—and without question the best gag in the flick is when Favreau pins Vaughn, dry humps his armpit, then derisively throws him a crumpled dollar bill.

Reese Witherspoon, like most females in comedy, falls victim to more jokes than she gets to crack. Kristen Chenowith has a little more fun playing her fertile, femme fatale sister—a stroke of perfect casting as her sister as she's the only actress shorter, blonder, and squeakier than her co-star. But Witherspoon is allowed a nasty, gleeful smirk when she accidentally knocks a baby's head into a door. The screenwriters have tied her characters arc to a station wagon's-worth of infants. Having revealed her ignorance of all things Pampers, Witherspoon is then prodded to undergo a maternal awakening so that she'll pivot and run contrary to Vince's responsibility-phobic eternal youth, and these two stubborn beasts will draw and quarter their relationship. That they Frankenstein-stitch back together their monster perfection is never in doubt, and to the film's credit, the rift is mended with moderate realism. Such truthiness, however, belongs in a kinder, gentler movie instead of a fanged comedy that voluntarily sacrifices its bite.