close
Ron Howard, Peter Morgan and Frank Langella paint a complex anecdotal portrait of the self-made monster that still troubles the sleep of the American Dream 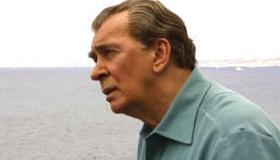 Based on a half-forgotten series of pay-for-play interviews conducted by a British playboy and a disgraced ex-president, Frost/Nixon does for Richard Nixon what The Queen did for Elizabeth II, and that is to make a distant and controversial political celebrity into something simultaneously more manageable and more profound. Both works share a writer in Peter Morgan, though only Frost/Nixon started life as a play. Where other Nixon movies have focused on high drama and constitutional crisis, this one finds the most compelling truths in anecdotal detail—an approach Morgan has raised to the level of high art. It’s a film worthy of multiple Oscar nominations, and one that probably deserves a few more in categories that don’t exist. (Why isn’t there an Oscar for subtlety, anyway?) Everyone who speaks English should see it, and everyone who can read subtitles should think about giving it a look.

Considering how thoroughly he haunts our cinema, it’s amazing that no one ever truly captured the ghost of Richard Nixon on film until now. Before the rise and fall of Nixon’s regime, movie presidents were mostly statesmanlike figures that used FDR’s clipped Hyde Park intonations to shower wisdom, grace and second tier Lincoln-isms on a grateful nation. The US government was largely a benevolent society run by aging and white-haired boy scouts who took off their hats in the presence of a lady and almost never appeared in public without placing one hand over their heart. American armies didn’t so much prosecute wars as initiate secular crusades, vanquishing evil and then returning to escort the longsuffering women who waited for them down the tree-lined streets of Mid-western towns where any ex-soldier could live out his days unscathed, tranquil and whole.

By the time the Nixon Presidency terminated, the cinematic shorthand for America and its politics had soured to the point of becoming unrecognizable. Long black limousines of official power prowled the night, firing on enemies and dragging unwilling bystanders onto stained backseats that swirled and clutched like whirlpools made of automotive leather. New filmic axioms had come into being: All politicians lie. Military officers are butchers and sadists. Veterans are frequently traumatized madmen. The CIA lurks in every shadow. And you are being watched. And overheard. And lied to.

It would be too facile to say Nixon broke America’s faith in itself, although it would be hard to overstate the public trauma of Watergate and of the Vietnam War Nixon promised to end and then extended into Cambodia instead. Nixon’s real achievement, however, wasn’t that he turned a nation of rubes into cynics. It was that he brought something dank and subterranean in the American character aboveground, where it became impossible to ignore. And so movies absorbed the syntax of his paranoia, his resentments and the skullduggeries mapped out by the inverted parabola of his trajectory—and fed that Nixonian shade back to audiences in the form of increasingly cheap and knee-jerk plot devices that are with us to this day.

The man himself was too intricate a monster to be depicted in such shorthand generalities, though several great directors gave it a try. Hal Ashby and Alan Pakula took the stock footage route, depicting Nixon in Shampoo and All the President’s Men as a tele-visual phantom—a distant spokes-model for malevolence and moral decay. To Oliver Stone, Nixon was Willy Loman, a backslapping low comedian in a movie incongruously framed as stentorian high tragedy. Robert Altman drew the most blood from the least resources: his forgotten 1984 movie Secret Honor used Philip Baker Hall to deliver a harrowing one-man monologue during a fanciful dark night of the presidential psyche.

For all his success and prestige, Ron Howard is a journeyman compared to any of the four filmmakers named above. And yet he has succeeded where they failed, in part because his general tendency as a director is to be a self-effacing facilitator of the material (which is great) and performers. With Frost/Nixon Howard has had the good fortune (and indeed the moral obligation) of hiring Frank Langella to reprise his Tony-winning performance as Nixon—or more accurately, to revisit his resuscitation of Nixon’s soul.

Most any actor of a certain age can probably “do” Nixon, for he was one of those unfortunate public men—like James Cagney, Peter Lorre and Jack Nicholson—whose mannerisms inspired even amateur impersonators. The revelatory genius of Langella’s performance is that his Nixon is doing an impersonation too—wearing a self-generated construct at least as artificial as anything Rich Little or Fred Travalina might have performed in 1977, the year when the TV interview that frames the action took place. To witness Langella’s Nixon enacting the American politician’s reflexive rituals of learned amiability is to watch a man torment himself into a shape he is unable to assume. It took a remarkable effort of will for someone as uncomfortable with himself as Nixon to climb so high in a system based on the popular vote, and Langella can communicate both the tenacity behind the rise and the inevitability of the fall in something as simple as Nixon’s inability to convincingly pet a dog.

Langella is matched—or nearly so—by Michael Sheen, the Tony Blair of Morgan’s The Queen, and an actor who will wrongfully be accused of reprising that earlier triumph with his portrayal of David Frost here. There are some major similarities, as there must be, for both Frost and Blair are self-made products in a class-based society—men who have risen through an all but closed system to impossible heights based on luck and personal charm. But Sheen manages to do something almost as complicated and soulful with Frost as Langella achieves with Nixon, and he has to act through a swoop of hair and a toothy, premeditated smile to do it. Initially playing Frost as a callow playboy, Sheen comes into his own after the compulsively combative Nixon virtually wills Frost into a worthy adversary by offering him a glimpse of something that is beyond telegenic charisma to resolve. In that Faustian moment, Frost sees himself in the image, with Nixon as a kind of overlooked shadow he failed to notice he was casting under the public glare of flashbulbs and klieg lights.

The terror behind Frost’s antic grin is palpable in nearly every scene after that, and it’s understandable and necessary that it be there. For it was a very long shadow Nixon threw too. One that falls on us still.