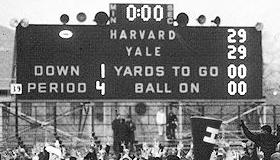 Arguably, the greatest football game in Ivy League history took place on November 23, 1968. Quite rightly, filmmaker Kevin Rafferty doesn’t think he needs to make that case too pointedly. Instead, he recounts the gridiron clash in an admirably spare movie containing interviews with players from both sides, intercut with excerpts from the telecast of the game held on a chilly autumn day in Cambridge, Massachusetts forty years ago. Harvard Beats Yale 29-29 combines the thrill of a riveting sports yarn with rich data about America’s well-educated baby-boomers. It’s rewarding even if you’re not a football fanatic, alum, or sociologist researching Ivy Leaguers of the era. Unfortunately, the only place you can catch it is at Manhattan’s Film Forum during the next two-weeks (letter sweaters and pom-poms optional). Given the narrow scope of the documentary’s subject matter—plus the relative football prowess of elite, northeastern universities today—it’s unlikely to attract huge crowds.

Although it gives away the ending, the oxymoronic title—which appeared as a headline in the student newspaper “The Harvard Crimson” —doesn’t spoil the excitement. Both teams were undefeated when they met during the last game of ‘68 season, but Yale was heavily favored and ranked 16th in the country. That, and the fact the underdog Harvard squad overcame a huge deficit, is why the outcome can be considered a win. In lieu of a blow-by-blow recap we see a truly amazing comeback, engineered by Harvard’s nervous second-string quarterback and aided by numerous turnovers and penalties committed by the overconfident Yalies.

Rafferty deftly alternates between snippets of his conversations with fifty athletes and sequences from the game as it unfolded, usually one or two crucial plays at a time, accompanied by straightforward descriptions from broadcaster Don Gills. Each player (no coaches, administrators, other students, spectators, or sports reporters are heard from) is identified on-screen by their name, position and either “Harvard” in crimson lettering or “Yale” in blue. They offer vivid recollections of the game itself, discuss their fellow players, and in many cases, reflect on the turbulent atmosphere on campus and in society-at-large, particularly regarding the Vietnam War. They are filmed sitting against non-descript backgrounds and there is no narration.

Actor Tommy Lee Jones, a Harvard guard, is the highest profile participant and tells a funny story about his roommate, Al Gore. We also hear from George W. Bush’s Yale roommate. Yale’s star quarterback Brian Dowling was the “B.D.” in his classmate Gary Trudeau’s cartoon strip that chronicled the team’s exploits and eventually became Doonesbury. Calvin Hill broke Yale’s all-time scoring record during the game and went on to a stellar NFL career with the Dallas Cowboys, but he isn’t interviewed. One key Yale player talks about the girl he was dating at the time, and we see a photo of them together—a Vassar undergrad named Meryl Streep.

There are a few eccentric characters; yet by-and-large they seem like a bunch of normal—if well spoken, well-heeled and intelligent—late-middle-aged guys. All are philosophical about the game now, without discounting its importance. Another common denominator in how they appear and sound is that they project a sense of comfort in their own skins. By the end, you feel like you’ve gotten to know them a little bit; and matching the talking head with the player on the field is an enjoyable part of the experience.

The “victorious” draw Harvard achieved was a team effort, but Harvard Beats Yale 29-29 is strictly an individual achievement. In addition to directing, producing and traveling throughout the country to conduct the interviews, Rafferty operated the camera, recorded the sound and did a fantastic job editing the footage. According to the press notes, he attended Harvard and was in the stands during the game, but he never betrays any allegiance to his alma mater or any animosity toward the university’s archrivals—perhaps because his father and grandfather both played football for Yale.

That latter piece of biographical information underscores the Ivy League’s reputation for being populated by a small circle of elites. The picture of legacy-filled homogeneity is only partly countered by Rafferty’s efforts to stress that many of the players actually came from working-class backgrounds. It figures given the sport (did the school’s fencing teams have as much socio-economic diversity?), but it’s not enough to dispel the impression we’re getting to see what the view is like from the ivory tower. Yale wasn’t even co-ed in 1968.

Nevertheless, as many of the players describe, football was an oasis for them—an escape from the serious divisions that existed off the field. That seems to have applied across the board, whether the young men landed at Yale or Harvard thanks to connections or merit. Indeed, real world considerations didn’t intrude that day. Despite being a stunning blow for Yale, players from both sides talk about how it seemed as if something supernatural, otherworldly or spiritual was happening during the final minutes of the game. Back-up QB Frank Champi, Harvard’s leader, gets the last word and describes the result as a “win-win for everybody.” Yalies might not agree, but I’m convinced.