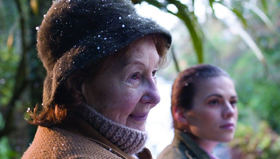 Like many, I'm pleased when veteran (read: old) actors get work, but its about time they form a union to demand better roles than “Cranky Kook Near Death.” Until then, we all must endure amiable nonsense like Anthony Byrne's hospice dramedy about a rebellious twenty something named Ellie (Hayley Atwell). Ellie enlightens—and is enlightened by, of course—the five most miserable oldsters who live in her estranged sister Kate's (Orla Brady) care center. We could do what most people will and pay lip service to its stars—but dodge sitting through the film itself.

Nestled in the green, river-running-through-it Irish countryside, Kate's retirement home should be a choice locale. Instead, it's hemorrhaging residents and employees due to the outrageous behavior of its worst inhabitants: catty Alice (Joan O'Hara), unstable former actress Georgia (Vanessa Redgrave), domineering judge Donald (Joss Ackland), and squabbling sisters Heather (Brenda Fricker) and Hazel (Imelda Staunton). Despite a shared interest in plate throwing and complaining, they’re constantly at each other’s throats and instantly make life hell for Ellie with 3 am orders for martinis and continual verbal abuse. Ellie's no saint herself, and so the first third of the film follows her efforts to keep her sister from firing her despite pitching afternoon tea cakes at Hazel's face and attempting to mellow Alice with pot cookies. Of course we know what's coming: hugs, sharing, and philosophy.

Either Maeve Binchy, the acclaimed novelist behind Circle of Friends, temporarily swapped out her brains for tapioca, or screenwriter Jean Pasley made a mess of this adaptation. The timing is in shambles; at one point, a character opens up her heart only to get underwhelmingly carted away in a hearse the very next scene. An afternoon ticks by like a month and seasons skip by without notice. Even odder, the only surprise in the plot is that it manages to be even simpler than expectations. We're anticipating the A-B-A-B formula of Anger-Bliss-Anger-Bliss, and are instead given a minimalist Anger-Bliss with no third act heartwrencher. Apparently, all one needs to cheer up a posse of bitter old people is a furious tongue-lashing. From said scolding on out, it's all gravy at an emotionally-satiating Christmas dinner, which drizzles on until the ending with all characters deciding to reconcile and live happily ever after—well, for however many months they have left.

Like a UK holiday pudding, this sop-headedness offers at least the mild, pleasurable buzz of watching great actors devour roles built on more than a series of quirks. They might all be the same species of wounded bird—lonely and with one furtive talent—but Redgrave, O'Hara, Ackland, Fricker, and Staunton tear into their parts as though the Academy is still dispensing awards like a gumball machine to any actor who admits that old people can be bastards. They—and audiences—should hold out for more.