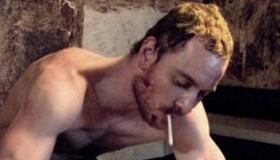 Hunger examines the 1981 hunger strike of Irish Republican Army prisoner Bobby Sands and the events that lead to his extreme decision. The film is a remarkable directorial debut from British artist Steve McQueen, who co-wrote the screenplay. Hunger 's vivid realism has received acclaim, including the Camera d'Or for best first feature at Cannes, but the unflinching and disturbing prison violence could limit commercial appeal.

McQueen said that when he was a child around 11 or 12 the image of Bobby Sands was on British television every night and that memory has stayed with him. McQueen's film, video and installation work has been exhibited in museums and galleries around the world. He received the Turner Prize, Britain's major award for Contemporary Art in 1999.

Most of the film has little dialogue, focusing on striking visual details and sound effects that give Hunger a forceful immediacy. McQueen's artist's eye is continually evident. The film begins with a brief on-screen background of the continual hostilities between Catholics and Protestants in Northern Ireland. Raymond Lohan (Stuart Graham) gets ready for his job as a prison officer in the Maze Prison, but part of his daily procedure before leaving home is to look under his car for explosive devices. His bruised hands bleed as he washes them. Brutality is part of the prison routine.

Davey Gillen (Brian Milligan) is imprisoned for the first time, sharing a cell with IRA prisoner Gerry Campbell (Liam McMahon). Like other republican detainees, Gillen objects to not being classified as a political prisoner and having to wear the prison uniform of the common criminal. The disdainful voice of Prime Minister Margaret Thatcher is heard saying "no political status." Gillen joins fellow inmates in the Blanket and No Wash Protest, refusing to wear any prison clothes, using only blankets to cover themselves; the inmates smear their excrement on the cell walls. Hunger is full of stunning images as the prisoners' further protests are met with ruthless retaliation. Information and a radio are cleverly passed between detainees and visitors.

Bobby Sands (Michael Fassbender), the leader of the prisoners, meets with Father Moran (Liam Cunningham) to announce his decision to start a hunger strike to bring further attention to the detainees' demands. Hunger changes style with a spirited debate on the merits of Sands' radical choice; very well-played by the two actors. Moran tries to dissuade Sands from an action he considers a futile suicide. Powerful scenes follow, showing Sands' severe physical deterioration and the reaction of his parents. Other prisoners join the hunger strike. McQueen finds a contemporary resonance in the 1981 events depicted in his film, saying that "the body as site of political warfare is becoming a more recent phenomenonYour body is your last resource for protest."