close
Like a daytime soap but not nearly as hot 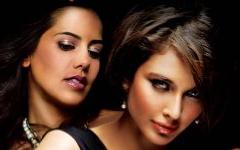 Based on her own life, author, screenwriter and director Shamim Sarif tells the story of her sexual awakening in the autobiographical film, I Can’t Think Straight. Here, Tala (Lisa Ray), a London based Jordanian Christian of Palestinian descent (seriously) represents the director. Sarif’s actual long time partner is represented by Leyla (Sheetal Sheth), a Muslim woman who, when they meet, is engaged to a male cousin of Tala’s. We may have that reversed, it maybe that Sarif is Leyla and her partner is Tala—not that it matters. The film is fairly awful in either case, and its box office will reflect this. Even the hot lesbian sex scene seeking crowd (and there is such a crowd) will be disappointed in I Can’t Think Straight, because there aren’t any hot sex scenes in this movie. This is a tasteful, romantic lesbian flick, and neither romance nor taste is a substitute for hot naked lesbians getting it on.

Though it’s Tala who makes the first move, it’s Leyla who reconciles her feelings and is willing to commit to their highly forbidden relationship first. Tala, despite the fact that she’s into chicks, is still subject to her family’s expectations, especially that of her cruel mother (played by Antonia Frering like Mick Jagger in drag), not to mention her religion and the influences of her home in Jordan, to which she flees when her feelings for Leyla get the best of her. As Leyla’s wedding approaches, she comes clean about being a lipstick lesbian, which her fiancé and Tala’s sister take remarkably well.

If this all sounds like the plot of a day-time opera that’s because it’s the plot of a lesbian romance novel, which is more or less the same. This, despite the fact it’s based on the writer/director Shamim’s actual life. The night-time soap opera acting paired with the Richard Avedon staging makes the film feel like a throwback to the very gay 80’s, perhaps even to the set of a lesbian themed episode of Dynasty.