close
Regenerating Muscles (from Brussels)? Worth a shot. 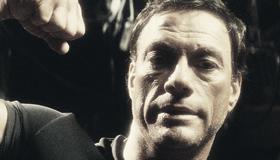 With his glory days well behind him, internationally cheesy action superstar Jean-Claude Van Damme has made a comeback by doing what few celebrities dare to do: poke fun at himself as a last plea for attention. The film is JCVD, short for Jean-Claude Van Damme, and it’s a playful story that has no problem eviscerating its lead actor for comedic effect. Taking true, embarrassing events from Van Damme’s life and putting a silly spin on them makes for a great ride full of action, comedy and mistaken identity. Director Mabrouk El Mechri keeps things light for the most part and as a result reminds us why “The Muscles from Brussels” was so much fun to root for in his heyday. Fan awareness and positive word of mouth should help JCVD achieve a modest arthouse return.

As JCVD opens we’re thrown into Jean-Claude Van Damme playing “himself” with a winking eye to the audience. He’s a former action hero with zero credibility, a bad professional reputation and no money. Worse, he’s a lousy father, as evidenced by his child custody hearing. Things go from bad to terrible when the Universal Soldier is accidentally caught in the middle of a robbery and assumed to be one of the criminals by the police. Public outcries of Van Damme’s wrongful judgment lead to a rebirth in the media spotlight and a chance to fix his problem—but celebrity life doesn’t taste as sweet the second time around. The fictionalized spin on Van Damme’s rescue from the depths of straight-to-DVD hell would be hysterical if it weren’t all too real for Van Damme. Instead they are effectively cringe-worthy since it’s public knowledge that (much like his fictional persona), Van Damme is considered a joke to everyone remotely associated with filmmaking.

The ability to make such a forgotten film icon relevant and relatable is one of the strengths of JCVD. Even at the peak of his career Van Damme was never considered a master thespian but he was popular for a specific kind of brainless entertainment. His height and heavy accent may have been a problem to some but others saw it as his trademark. In all his films he fought an action-fueled battle with all the panache of cheesy Hollywood filmmaking and delivered escapist entertainment. Fans loved him for it but eventually they moved on. Playing twin brothers in a handful of movies turned into a cheap parlor trick and bringing Hong Kong director John Woo to direct his first American film only to turn around and hijack the project himself was a bad idea in every conceivable way. JCVD reminds us of all these painful memories but also successfully reinvents “The Muscles from Brussels” for a new generation who have yet to learn about half-great “cinema” like Bloodsport, Kickboxer, Double Impact, Hard Target or Timecop.