close
This Lake is shallow 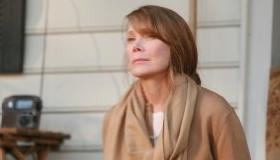 It’s largely thanks to Tennessee Williams that the concept of the “Southern Drama” even exists; a peculiar theatrical and cinematic subgenre in which sweat, sex, violence, economic hardship and mosquitoes all blend together in a hot-tempered gumbo meant to force feed audiences some sort of salient life lesson. While there can be no denying the importance and the power of classics like To Kill a Mockingbird, In the Heat of the Night or The Last Picture Show, it’s a truism of the form that such efforts are about as subtle as a Sunday sermon.

Nonetheless, first-time filmmakers Hunter Hill, (Executive Director of the popular New York magazine “Paper”), and author Perry Moore, (also an executive producer of the Chronicles of Narnia films), felt confident enough in their own southern roots to attempt making a similar drama of their own. The resulting Lake City, loosely based on events from Hill’s own childhood, is an intermittently admirable but largely incongruous work that suggests not only divergent sensibilities on the part of the two neophyte filmmakers, but a certain indecisiveness regarding their core audience which, in this case, isn’t likely to expand far beyond the most loyal core of indie film aficionados.

Believing that a young single mother and drug addict named Hope (Drea de Matteo) have absconded with a stash of his narcotics, a ruthless drug dealer aims to beat the necessary information out of her boyfriend Billy (Troy Garrity). But Billy makes a run for it, snatches Hope’s young son Clayton (Colin Ford) and hightails it back home to reconnect with his estranged mother Maggie (Sissy Spacek) for the first time in years. The reunion proves anything but congenial, however, as it resurrects the ghosts of a certain incident from decades past—an event so horrific, so devastating that it contaminates their relationship even to this very day—neither of them are able or willing to so much broach the subject with the other.

That the film vacillates between family drama and crime thriller isn’t really the problem. Numerous other films, most notably Peter Weir’s similarly-structured Witness have managed the feat with surprising aplomb. The problem here is that Hill and Moore never seem confident enough in the film’s dramatic elements to fully invest in them. The infusion of drug dealers, mobsters and murderers appears less an integrated part of the overall story than a stopgap attempt to inject a spontaneous eruption of excitement into a film that might otherwise seem small and methodical. Unfortunately, that very infusion has the untended effect of derailing much of the film’s most resonant material. Like a gunshot disturbing a flock of resting birds, the film repeatedly lays waste to its own delicate emotional fabric, juxtaposing incompatible tonalities in a way that seems more likely to leave audiences emotionally confused and frustrated than moved.

If not for the presence of Sissy Spacek, it’s likely this would have ended up going straight-to-DVD or cable television—outlets where more tempered expectations would have created a more receptive environment among a broader potential audience. Among a highly competitive field of year-end Oscar hopefuls, however, a fast exit to DVD and cable is probably where this film is headed anyway.