close
This Madagasgar is a welcome Escape for parents 2 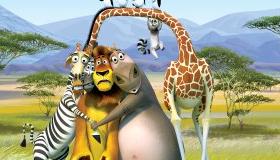 The wacky New York Zoo animals last seen stranded in Madagascar are back and better than ever in this hugely entertaining and inventive sequel to the internationally successful 2005 DreamWorks ‘toon. The first Madagascar film certainly didn’t rewrite any rules of animation but was reasonably enjoyable on its own terms. The new entry, which smartly gives a lot more screen time to Sacha Baron Cohen’s amusing lemur, King Julien, is creatively a notch above the original without sacrificing any of the charm that made these characters so memorable in the first place. Box office returns should be Giraffe-sized over the November/December holiday period followed by a long life on DVD.

After a prologue in which zooperstar lion Alex (Ben Stiller) is caught in Africa, separated from his father, Zuba (Bernie Mac) and brought to the zoo, the sequel rejoins the gang about to take off in a crudely made airplane, fueled by a slingshot and headed straight to New York. Unfortunately for Alex, lovelorn giraffe Melman (David Schwimmer), fast talking Zebra Marty (Chris Rock) and svelte hippo Gloria (Jada Pinkett-Smith), the aircraft sputters and crash lands right in the middle of the vast plains of Africa where they run into a whole new group of creatures including Alex’s long lost dad and mom (“The View’s” Sherri Shepherd). Now, in order to fit in, Alex must go thru the right of passage, which Zuba’s main nemesis, Mukunga (Alec Baldwin), renders nearly impossible.

As Alex fumbles along, Marty tries to integrate himself into a herd of lookalike zebras, Gloria gets hooked up with a Barry White—talking hippo (will-i-am, who also contributed to the score) and Melman looks for love. Meanwhile King Julien and cohort Maurice (Cedric The Entertainer) are involved in wacky shenanigans trying to get water from the gods. On top of that they must all deal with a group of threatening human tourists led by a tough talkin’ fightin’ grandma (Elisa Gabrielli).

Nicely animated with state-of-the-art computer graphics, this Madagascar is miles ahead of the first edition in terms technical savvy. Voice over performances are aces with an appealing Stiller holding things together as the showbiz-centric Alex, Schwimmer sweetly lovable as the giraffe who is up to his neck in romantic thoughts, Rock as a Zebra who wants to fit in with the crowd and Pinkett-Smith who turns on the juice as gorgeous (at least to other hippos) Gloria. Cohen steals the show with King Julien’s expanded presence while Cedric The Entertainer gets the sidekick thing down pat. Bernie Mac plays it relatively straight in one of his last film roles (along with this week’s live action entry, Soul Men ). Baldwin is a nice addition, adding shades of gray to this evil lion.

Certainly the kids are going to love it, but thanks to some hip writing and smart new directions, Madagasgar is even a welcome Escape for their parents 2.