close
The candlelight vigil marches on... 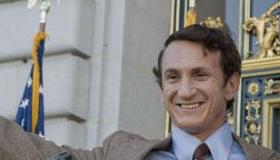 Gus Van Sant's Milk is at once an homage to the country's first openly gay, publicly elected official, a love letter to the movement he aimed to forcibly expel from "the closet" and a celebration of the city in which the historic events occurred. Ironically, Van Sant's reputation for exploring the fringe ( Mala Noche, Gerry ) and digging beneath the painful surface of controversial or unseemly events ( Elephant, Last Days ) is a legacy he doesn't bask in here—but he doesn't forget it either. Like his last Oscar contender, Good Will Hunting, the script for Milk is fairly conventional. But the themes are woven masterfully and allude to consequent themes built by other Queer Filmmakers, past and present. Its oddly timed release after the 2008 elections won't temper box office attendance—especially not in San Francisco, where, I'm thrilled to report, there are parties associated with the film's release eager to reach a fanfare of which Harvey Milk himself might have approved.

The Oscar Winning 1984 doc The Times of Harvey Milk, directed by Rob Epstein, was a major source of material for this film and Van Sant gives a specific "Thank You" to Epstein at the end of his film. Yet, the most efficient and affecting homage made to Times is found in the stock footage. As opposed to recreating 1977 San Francisco, Van Sant employed archival material, thus asserting both the verity of the story and the role of the film as a kind of (bigger) public record of Harvey Milk, the man. It would be unfair to compare Times and Milk given the differing contexts in which the films were made. Epstein began Times before Harvey Milk's assassination and after his first project, the collectively made, granddaddy of Gay Movement docs, Word is Out. Meanwhile, Hollywood fumbled with Milk's story for moons, occasionally releasing rumors about the attachment of directors like Oliver Stone and stars like Kevin Spacey and Robin Williams. So far as the generations of remove are concerned, it's apparent Van Sant was making any and all efforts to bring Milk's story as close to its origin points as possible. The authenticity this Oregon native provides is palpable and, at times, breathtaking.

Not to make too much out of the timing of this film's release or the appearance of Josh Brolin (here playing Milk's adversary, Dan White), Harvey Milk bears something in common with our exiting president: prior to middle-age, he had sacred little political activity on his record. When he left New York in 1970 with his lover Scott (James Franco), the move was a clean break from a successful but unhappy stint with a corporate workplace and a closeted life. The drive across country is captured in the car, sweetly and without sound—a sort of Kodachrome awakening and a promise to leave the staunch black/white/grey of the repressive East Coast behind.

In San Francisco, the city is in full, manic, semi-chaotic, swing—a bastion of confusion and high drama. Milk and his lover take an apartment in the Castro and open a camera shop that quickly becomes a haunt for locals. It's not long before Milk becomes a community organizer. Police violence rained on the gay community, specifically targeted at gay bars; the street level beatings and slayings and one instance in which Milk is inclined to run down the street from a shadowy figure, all drill home the otherwise overlooked reality that being gay, even in San Francisco in the 70's, was perfectly unsafe. One shot of Penn standing over the body of a slain neighbor with a police officer plays out poetically, reflected on the shiny side of a whistle. The whistle was the community tool for awareness and support. The gay community carried whistles to call for support in the event violence looked imminent, or police threats were present. As a motif, the whistle was a multi-purpose tool: it was a cry out that had the potential to prove the community's power in numbers. This power is precisely what Harvey Milk found ways to harness from the beginning of his work as an activist to his transformation into an activist with a ties to power. From the necessity of protection sprang the need for exposure.

A subtle and limitlessly complex theme is woven in reflections. When Milk sees a riot emerging outside the window of his camera shop, the growing mob looks like a backdrop to Penn's reflection in the proscenium like window: the moment is defining. Milk's charisma with the crowd is beautifully rendered—a ramshackle, near disaster of barely understood proclamations and surprisingly effective rabble rousing. As Milk is swept away by the masses, his partner Scott stands in front of the window—the crowd now reflected onto the window that limits him from the universe his partner works tirelessly to forge and a barrier to the life of the "openly gay" Milk.

While that term ("openly gay") seems a tad outdated, the subject in the film is of great import. The reflections seem to signal an ongoing dialogue about the performance of identity and its fluid, ever changing, counterpart beneath the surface. The duality here lies with Milk as an historic figure. At once he tells his peers they need to come out because for as long as people think they don't know anyone who's gay, they'll think gay is "other" and feel no need to grant "other" rights. Living "out," in this case, is less a choice than a path of survival, as political change can hardly be expected if silence is kept.

A late coming theme is that of opera and the appreciation for a drama that's so big as to exceed the boundaries of the everyday. After three unsuccessful attempts at office (one of which carried a slogan pitting Milk against the political "Machine," another necessitating he cut his hair and don a suit), Milk finally reached office under the newly designated District Supervisor system. (Wounded by the outcome of Milk and Mayor George Moscone's careers, the district system was outdated and reinstated again in 2000). Milk instructed his advisors never to wear suits, always take the stairs and to make the biggest show of it possible. This was, he was quoted as saying, his "new theatre" (but another reference to performed identity). The scenes in which Milk carries out these now legendary dialogues is understated—even though Penn and co-star Emile Hirsch (as Cleve Jones) are half dancing up the interior staircase of City Hall as they dialogue.

Penn and his co-stars are repeatedly framed with an eye to the older, more Olympian detail inside City Hall, giving them a sense of perpetuity, grandeur and universality. This is, no doubt, part of the purpose and (dare I say) sanitization of the story. Ultimately, the potency of this film is also one that requires a call and the power of numbers to see effect. (Ask Rob Epstein. He'd, no doubt, agree.) It's not that Van Sant eliminates otherwise distance-making material; the sex scenes, while quite tasteful, are far from mysterious, and the kissing is sweet and constant—like life, one supposes. Yet this story, even in its tireless attention to detail and history, is still attired with Oscar appropriate finery. So, much like Harvey Milk's public transition from hippie to machine-managing public servant, Van Sant's Milk bridges a gap we've perhaps spent little time exploring. And in the space between the local and the national, the activist and the public servant, grassroots doc and wide released feature, Van Sant is transforming a city history into an American story, and affording a larger number of bodies access to the story of a man whose battle far outdates the long hours he put into it. Surely Milk knew (as does Van Sant) the march only began with him. And if that's not hopeful, it's hard say what is.