close
Daniel Craig seduces for the second time in Solace 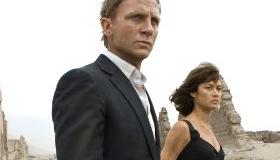 With Daniel Craig now firmly establishing ownership of 007 on his second outing, the franchise looks safe in his hands for further global domination at the box office. Tightly scripted, it delivers handsomely on spectacular set pieces in exotic locales from the Italian Alps to arid planes of Chile.

The breathless antics may be more Jason Bourne than James Bond but that doesn’t prevent 007’s latest excursion from exerting a fierce grip that never really lets go of your senses from the traditional opening car chase—this time in the Italian Alps—to the closing scenes across the arid plains of Bolivia.

There is no time to reflect on the implausible aspects of the plot or to lament the lack of time for proper romancing or relationships between Bond and his female cohorts; apart, that is, from Judi Dench’s steely matriarchal M who worries her normally trustworthy protégé may have gone “wild.” Once one challenging burst of physicality is over then it is on to the next one at breakneck speed for Craig, whose muscular physique is only on show romantically in one discreet scene of dalliance.

Although this may be Bond as action hero, Craig has enough presence with his firm jaw and blue eyes to infer a brain at work, as well as brawn, as he countermands orders from MI5 for the global good.

It is worth recalling that this is Bond number 22, making it the longest running film franchise in movie history. Director Marc Forster ( Monster’s Ball ) does a decent job of continuing to give Ian Fleming’s creation a breath of new life—and its streamlined running time of a crisp 106 minutes (much shorter than Casino Royale 's 147 minutes) should please theatres trying to cram in as many shows as feasible.

Forster is strong on the set pieces: memorably, one takes place during a performance of the opera Tosca in the Bregenz Opera House while another has Bond bailing out of crashing plane without a parachute. Even before the roller coaster is properly under way there’s a fantastically energetic sequence against the backdrop of the famous horse race in Siena.

Writers Haggis, Purvis and Wade have no compunction about displaying their hero’s sheer callousness of intent as he dispatches agents both friendly and evil, although for some tastes the narrative line may be lacking in substance.

Against Bond’s all-pervading dominance it is difficult for the rest of the cast to make their marks yet. French actor Mathieu Amalric emerges strongly as a corrupt tycoon trying to overthrow the Bolivian government behind a smokescreen of green credentials. Olga Kurylenko, too, is in there with more than a shout as the feisty local trying to avenge the deaths of her family, while the excellent Italian veteran Giancarlo Giannini returns briefly as Mathis, a close confidant of Bond. As a more typical Bond girl, Gemma Arterton dispenses a disarming brand of cool chic.

Craig doesn’t have all that many opportunities to turn on the fatal charm but when he does there are willingly compliant victims, such as the airline check-in girl who does just as she is told. With Daniel Craig making the running, who wouldn’t?