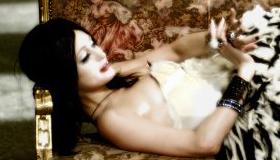 Without question, Repo! The Genetic Opera will pop up on worst-movies-of-the-year lists. More appropriately subtitled The Generic Opera, this adaptation of a stage musical by Darren Smith and Terrance Zdunich is a mangy mutt of a motion picture. A derivative concept, a screechy blend of musical styles, a mediocre book and lyrics, borderline production values and barely competent performances make for an excruciating experience. While it may aspire to cult status, the odds are not good that it will gain a loyal following, let alone make a killing.

All you need to know about Repo! is that Paris Hilton has a prominent role and that she’s the best thing in it. Sarcasm aside, the fact she was cast tells you where the movie’s head is at: namely, in the amateurish clouds where a celebrity connection might ensure much-needed attention—who cares if it’s for the wrong reasons?

In the year 2056, organ failures are rampant on planet Earth and a biotech company GeneCo is selling transplants. Buyer beware! If you miss a payment, scalpel-wielding repo men take back your organs. Infirm teenager Shilo (Alexa Vega) suffers from a blood disease and is quarantined by her doctor father (Anthony Stewart Head), who works on the sly for GeneCo as a masked harvester. GeneCo’s villainous CEO Rotti Largo (Paul Sorvino) was once romantically involved with her deceased mother and he’s got something on Daddy. Shilo is desperate to be cured of her disease and learn more about her mother, whose close friend Blind Mag (Sarah Brightman) is a singer with ties to Largo. Meanwhile, Largo’s three children, including the chameleon Amber Sweet (Hilton), are addicted to cosmetic surgery and chomping at the bit to take over the company when he kicks it. In addition, a grave robber goes around siphoning off a synthetic painkiller called Zydrate from dead bodies. Much of the world’s population is addicted to the drug and it’s a pity no Zydrate will be available for those unfortunate enough to find themselves in theaters where Repo! is unreeling.

The gore isn’t a problem, unless you fail to see the humor in a repo man pulling out a man’s intestines and stomach, inserting his hand in the cavity and moving his lips as if the corpse were a ventriloquist’s dummy. In any case, the caterwauling that passes for singing is much more nauseating than the bloody violence. Sorvino, supposedly an accomplished opera singer, resorts to speaking his songs the way Rex Harrison did in My Fair Lady. Only Brightman’s solo number toward the end sounds particularly musical, or at the very least like it’s being sung on key. During the scene, Blind Mag plucks her eyes out and is impaled on an iron fence. If the alternative is being forced to watch and listen to Repo! The Genetic Opera again, hers isn’t such a bad fate.