close
Mendes leads DiCaprio and Winslet down a Road worth traveling 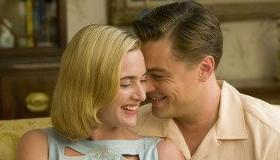 Revolutionary Road, the first and most lasting novel by the late Richard Yates, was published in 1961. It was a shake and a slap to the post-war suburban Middle Class, arguing that success in American society need not breed conformity in its trappings and a forfeiting of personal or professional ambition. Many have subsequently tried to turn the book into a film and it can be argued that 2008 is one of the least appropriate times to make the attempt. Nowadays, Yates’ plea for cultural acknowledgment of the dangers of suburban malaise is no longer surprising or controversial. But even if its relevance has shrunk to a less societal (more personal) level as a portrait of a married couple trapped in the Great American Lifestyle, it still packs considerable punch. That power is mostly retained in this intelligent and emotionally dense adaptation directed by Sam Mendes, who explored similar themes (albeit with a satirical touch) in the Oscar winning American Beauty. Much will be made of stars Leonardo DiCaprio and Kate Winslet reuniting for the first time since an intimate, low-budget, independent sleeper from 1997 called Titanic. And while both actors are terrific, Winslet gives a brilliantly detailed performance of swallowed emotions that will almost certainly result in gold-plated kudos come awards time. Her achievement will help sell this dark and difficult material, leading to decent returns.

In a way, Mendes’ high-gloss visual language (executed by master DP Roger Deakins) is an extension of what Yates was railing against. The independent spirit of chance-taking for personal betterment goes unfulfilled with Mendes’ Restoration Hardware aesthetic. But there’s something to be said for the perfectly-coiffed and studied design values that represent what Frank and April Wheeler (DiCaprio and Winslet) are trying to reject. When they first meet at a New York City party in the 1950’s, Frank and April’s attraction is quick and undeniable. He’s a longshoreman and she harbors dreams of being an actress. Soon, they’ve gotten married and ditched the city for the era’s very definition of success—a leafy Connecticut suburb, a beautiful house and two beautiful children. While Frank sublimates any career ambition in his lifeless job selling business machines, housewife April has enough free time to recognize their rut and conclude that they’re better than the neighbors who’ve traded their dreams for an American model of contentment they had no say in crafting. She suggests to Frank, whose affair with a girl from the secretarial pool belies his own creeping dissatisfaction, that they pack up everything, “move to Paris, and save ourselves.”

In his accomplished adaptation of Yates’ work, screenwriter Justin Haythe understandably sheds some of the novel’s densest layers, but there’s still plenty of subtext to go around—although there are moments when Frank and April seem to be playing to the themes and not getting the audience intimately invested in their characters. But such criticisms wither given everything else that works, especially the performances. Since his Oscar nominated turn in Blood Diamond, DiCaprio has grown into himself to the point where he’s less of a sell as a suburban spouse and father. And while he nails both sides of Frank’s journey, from the “little wise guy with a big mouth” at the beginning to the beaten down husband at the end, Winslet still outpaces him. April’s ever-shifting, near psychotic mood swings would feel arbitrary and convenient if not for Winslet’s focus and specificity. As good as she is, the most surprising performance is by Michael Shannon, who plays John, the clinically insane son of Frank and April’s realtor (Kathy Bates). While the perplexed neighbors begrudgingly accept the Wheeler’s unusual plan, John sees through everything. And Shannon takes over the picture in the handful of scenes in which he appears. John and the other supporting characters are crucial because the Wheeler’s decision is only groundbreaking when played off their complacent neighbors and co-workers. (“the nice young revolutionaries on Wheeler Road”, the couple is mistakenly called in a telling slip). By the time Frank and April’s marriage has devolved into vicious bouts of psychological gamesmanship, complacency doesn’t seem like such a bad way to go, even if it means abandoning the challenges and aspirations that provide life’s forward momentum.

With its Virginia Woolf -style dissection of a marriage and its reverence for the source material, Mendes and his team have managed probably the best adaptation that a production entity (Paramount Vantage) owned by a worldwide media conglomerate (Viacom) could comfortably create. Heartland acceptance for such bleak, adult fare could mean the film’s title won’t be the only thing revolutionary about Revolutionary Road.