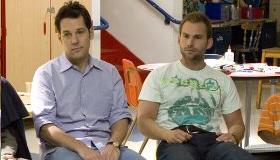 Five people wrote this comedy and there's nothing to say about it. Two jack-offs, Wheeler (Seann William Scott) and Danny (Paul Rudd), shill for the energy drink Minotaur at elementary school anti-drug rallies, which are really just excuses to get kiddies hooked on taurine. The film's invested as much in its well-being as its leads have in theirs, which is to say—not much; it's an ordinary comedy destined for modest receipts and cable purgatory.

Scott's Wheeler is just another thinly written horndog, the kind of role he's been playing since the 90s, even though films like The Promotion show he's capable of better. He's really only a foil for Rudd's Danny, who’s been miserable for years—10 of them spent selling his soul for Minotaur. When long-term girlfriend Beth (Elizabeth Banks) dumps him after too many hostile outbursts, Danny goes on an energy drink rampage that climaxes five minutes later with him crashing the Minotaur mobile (a monster truck with a nose ring) on a school mascot.

Sentenced to 30 days in jail, or 150 hours mentoring for Sturdy Wings, Wheeler and Danny pick the kiddos and then nothing much happens until the climax. Under the tyranny of Study Wings founder Gayle Sweeny (Jane Lynch), an ex-addict always crudely shoving her coked-out past into conversations, Wheeler is paired with Ronnie (Bobb'e J. Thompson), a tiny kid who cusses like a sailor's parrot. I was worried about young Thompson's future for a minute as his character's vocal obsessions appear to be tits and Martin Lawrence, but then found out that he's a 12 and a half year old who only looks 5. He'll still discover girls years before Danny's protege Augie (played by Christopher Mintz-Plasse, who shot to fame as McLovin in Superbad ) who's twice Ronnie's apparent age. Continuing in the grand footsteps of Screech, Urkel and Napoleon Dynamite as a typecast geek who will eventually have to repudiate stardom if he ever wants to get laid, Mintz-Plasse wears a cape and plays LAIRE, an interactive anachronistic medieval battle world.

The script by Rudd, Ken Marino, Timothy Dowling, W. Blake Herron, and director David Wain, can hardly rouse itself to make any plot points or even any jokes. For that matter, Wain seems uninterested in directing his own flick. Still, it's not complete torture—even when exerting minimal effort, Paul Rudd is still hilarious. Here, he hardly cracks a one liner or rouses his expression from a frown—it's the ultimate in inert comedy. His character could have been cast with an eggplant, though it’s nice to have Rudd instead. His scenes with Ken Jeong, as the despotic King Argotron of LAIRE, who forces his dorky, middle-aged minions to salt his food and feed it to him, don't have many laughs, but have the pleasant tension of waiting to laugh at a punchline that never comes. Like Rudd, no one in the ensemble, except young Bobb'e J Thompson and Lynch, gives the flick their all; they give it enough, no more, no less. And if movies were free, it wouldn't matter, and someday, like sands through the hourglass, it won't matter on a Saturday afternoon cable channel that Role Models is only mediocre—no train wreck, no treasure, just background noise to a hangover and a pizza.