close
Don’t quite got Soul 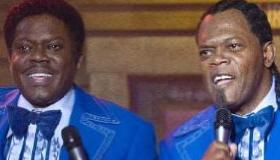 A musical form whose invention is generally (if not generously) credited to Ray Charles, Soul music is a combination of gospel and R&B, with some blues thrown in. So maybe it’s fitting that Malcolm D. Lee’s Soul Men is also a combination of elements: in this case comedy, road movie and musical. Sadly, however, two hallmarks of Soul are style and spirit, both of which Soul Men lacks. What keeps this medium-grade formula picture from coming to a complete stop are the precious crumbs of genuinely funny comedic banter between well-paired stars Samuel Jackson and Bernie Mac. Otherwise, the humor in Robert Ramsey and Matthew Stone’s script is no more advanced than the slapstick, sex jokes and putdowns that marked Lee’s other supposed-comedies, including Undercover Brother. A multiplex time-waster with decent box office potential, Soul Men is most notable for being one of the final onscreen appearances of Mac, who died in August of pneumonia at age 50.

Mac plays Floyd Henderson, a long-ago singer in a once-popular Soul band called The Real Deal, where he performed with partner Louis Hines (Jackson). The two have been estranged since they fought over a woman and haven’t spoken in decades. Floyd currently runs a car wash while Louis lives in squalor in a dingy apartment. When their early-career bandleader dies, a tribute concert at New York’s Apollo Theater is arranged and Floyd is asked to perform backup duties with Louis. Energized by the prospect of a career resurrection, Floyd tracks Louis down. The trash talking and the insults start immediately (and grows tiresome just as quickly). As a consummate standup, Mac flings every sling and arrow with hammy aplomb. Jackson has never lacked for attitude, but he’s not a natural comedian and Louis is not much more than a bundle of cornrows and peppery dialogue. Although a fool’s errand for both, together they row a pretty sturdy lifeboat. But the movie takes on water faster than they can bail.

With only days to go before the big reunion concert, the pair hop into Floyd’s vintage Cadillac and begin the cross-country drive to New York. This gives them plenty of time to rehash old disagreements and take a side trip to find the woman who triggered their bitter breakup. But instead of reuniting with their mutual love they meet her daughter, Cleo (Sharon Leal), a beautiful singer who ditches her wannabe rapper boyfriend, Lester (Affion Crockett), to accompany the men to Harlem. As the only performer who feels authentic, Leal holds her own against the two leads and the over-amped ravings of Lester. But it’s not her movie. Mac and Jackson do all the lifting. Their singing and dancing may come up short, but when they put the paddles to this dying patient of a script, they occasionally jolt it to life. Detours along the way to the Apollo are broad and unfunny, including the hijinx that ensue when Louis brandishes a gun and later when Floyd seduces a toothless fan (poor Jennifer Coolidge).

The gold standard for a music-inspired comedy remains John Landis’ The Blues Brothers. Bros. dripped love for the Blues and respect for its pioneers, even managing cameos for many of them, and the rambunctious/ridiculous storyline only cemented its status as a classic modern comedy. None of this could (or will) be said about Soul Men. Lee’s vision is so functional even the sincerity of the movie’s love of Soul music falls into question. The movie features a late-inning cameo by Isaac Hayes, who also died after filming. The closing credits are a very nice and worthy tribute to both men. Their careers deserved to end on a more inspiring note.