close
A diamond in the rough 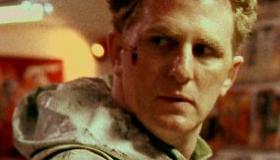 What’s technically a spin on the comic book genre also plausibly mines the phenomenon of super heroes as a concept. This long shelved indie darling is scrappy and follows in the tradition of the “diamond in the rough” indie so popular in the Sundance fests of years ago, before tentpoles and mid-range regional cinema came to cover so much of the terrain. This film is pitch perfect, with a charmingly pragmatic construction and a small but well collected cast. Star Michael Rappaport is, at times, baffling he’s so good. One of the “Six Shooter Film Series” which Magnolia is using to inaugurate its “genre arm” Magnet Releasing, Special will have a Special premiered on November 7th as part of HDNet’s ULTRA VOD program. Theatrical release in New York and L.A. will follow on November 21st. Box office could be small but flick could get legitimate and long-term affection on DVD.

Les (Michael Rappaport) is a shy, mild mannered, comic book reading, metermaid. Presumably for income, he signs up to be a test subject for a new antidepressant called “Special” (Specioprin Hydrochloride). Early on, we get the sense that desperation is afoot when Les begins a voice over read directly from his drug journal. Working outside of the now-prevalent notion that social or personal decline is usually recorded (usually on a MySpace page—journals are so old school!) Les’ journal gives us insights via metaphor. Les tells us about a comic character who feeds on people’s souls, but as opposed to radically transforming bodies into automatons, the soul-eater feeds on one person’s soul over the course of many years, “so the victim could only have a vague sense of something slowly disappearing.” He follows this with, “Maybe I have been a little depressed lately.” When his boss learns he tore up a ticket mid-protocol (for a woman cruelly feigning a crying spell) he weakly defends himself before his boss forces upon him the metermaid’s creed, which painfully (and unsubtly) begins “I am important.” Les blankly follows through the motions. That seems his lotuntil the drug kicks in.

He decides he has super powers, and by a stroke of direction that was haute couture when it was done (likely around 2005, if not earlier), we’re left undecided about the verity of Les’ abilities. Truth be told, the direction seems occasionally undecided as to Les’ powers too but I contend that mutual confusion is bold and deliberately chosen. In a way that’s still convincing, we’re suffering with a degree of ambiguity Les is free fromnow that he’s on the pill. Sometimes we see his point of view to fantastically comic effect, other times he’s clearly ‘off his rocker,’ but there’s a lot of pathos in his situation: he’s clinging to a mania and its attendant super hero valiance for dear life. And why shouldn’t he? It’s an incredible opportunity if you (want to) believe in it.

Les, in a newly minted, white leather costume, begins tackling people he finds suspicious. Much like his costume, his antics are simultaneously hilarious and horrible, and they effectively create the most enjoyable and impressive feature of the film: its tone. During Special, we are constantly in awe, teetering between amazement at Les and a compulsion to laugh at him. This is immediately polarizing because, kind of like the experience of reading comic books, our identities are negotiated in this flux between reactions: laugh for the wrong reason and you’re with the villain, laugh for the right reason and you’re in bed with the hero—but how can you tell which reaction is the right one, especially when Les’ well-intended actions ultimately hurt him? Les’ pursuit to prove that goodness and importance are bound to each other (a part of the mythos of most comic book stories) dovetails nicely into his struggle against the drug company investors, who see him as a liability, if a disposable one.

For a boy-centric indie, Special could’ve been very smart ass, but it wisely settled for smart instead. The actors are clearly all on the same page and in the hands of less capable actors, this could have easily devolved into some matter of broad comedy.

In the most adoring turn of script, Les says he had a dream and realized “there was no reason I couldn’t fly.” It’s a form of logic that recurs throughout Les’ internal monologue—and precisely the sort of logic that informs both joyful and reckless behavior (e.g. Bungee jumping? Why not?). “I’m not unhappy,” he repeats. This, the film gently implies, is the default logic that resulted in Les’ “life of quiet desperation.” Les’ delusions aren’t simply justified they are the logical outcome of a life that requires regular fantasy to sustain. This film is critiquing a genre that’s rightly obsessed with the origin story—and the modern super hero is a human with a self-imposed calling/responsibility—but here, we have all the red flags (the possible insanity, the physical damage imparted by crime fighting, the moral ambiguity of intervening in crimes and therefore destiny) but the real, legit, overarching problem, is this guy’s on drugs. Yes, they’re pharmaceuticals but for a while, so was lotsa stuff.

Like Les does in the film, it would be nice if Special ’s performance in the box office could give us a “faint glimpse of what it would be like to be unstoppable.” It’s modest but complex and finds a gentle way to get its hooks into you and keep them in long after you’ve left the theatre.