close
Meditation on divorce is worth the commitment 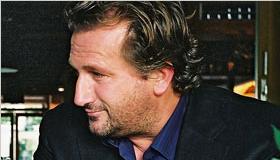 Although a drama about a divorced couple sounds like a real downer, one of de Jong’s primary achievements is highlighting the positive in the bleak scenario she conceived in collaboration with co-writer Jolein Laarman and the actors. The movie consists of short scenes in which redheaded Roos (Elsie de Brauw) and Martin (Marcel Musters) meet in upscale urban eateries and discuss their still-entwined lives; they’re also shown dining one-on-one with friends and business associates. These episodes are separated by snippets in which their silent son, Isaac (Stijn Koomen), appears in a near catatonic state or breaks into other people’s apartments, which he wanders through without intending to steal or do anything disruptive.

Roos and her chain-smoking former hubby, a journalist, are still very much in love and yet are just as obviously incapable of living together. Their connection is so strong that no matter how insufferable they find one another they can’t be apart for long. Each goads, mocks, and infuriates using bitter words and, on one occasion, slaps to the face. Roos describes him as a “fat, gluttonous, selfish non-father.” Martin, a veritable chatterbox and bon vivant, accuses her of being suffocating and bossy. They’re both right.

In addition to their tête-à-têtes, we see Martin on a date and lunching with his editor, and Roos dines on separate occasions with two colleagues and her mother. Each scene utilizes tight close-ups of one character without any reaction shots. In fact, we never see any of Roos or Martin’s other interlocutors head on. As if hearing their self-obsessed banter wasn’t proof enough, this choice physically underscores their narcissism. Not only do they dominate every conversation, the only space that matters is the frame they’re in. It’s no wonder Isaac yearns to be in other people’s flats, to occupy alternate interiors; he’s more emotionally troubled than your average teenager.

Much of the tension derives from whether Isaac will harm himself or someone else. The samurai sword he owns is certainly a cause for concern. And while Roos is genuinely worried, her sarcasm (for instance, when yelling from off-screen as the camera studies Isaac’s face, “This is not a shelter for deaf-mute adolescents!”) probably won’t help. Totally withdrawn, he’s way beyond sullen or morose. Still, one suspects his refusal to communicate verbally stems from never being able to get a word in edgewise with either parent; we can’t know for sure, partly because he’s never in the same room with Roos or Martin until movie’s end.

Roos is intent on discussing Isaac’s mental health during her encounters with Martin. He only urges her to give him some breathing room or take him on a trip. Later, he pitches his editor an idea for a book about Hikimori, the term for how thousands of hermit-like Japanese teens choose to live. Without naming Isaac, he claims to have direct access to a Dutch example of the phenomenon. Claiming his book would be a portrait of the age, he laments ‘there’s no such thing as a normal childhood anymore’ and the pressure to perform is crippling young people. The irony being that he and Roos are themselves portraits of the age and that his ability to turn everything into fodder for his own work is as pathological as anything Isaac is undergoing. At least their son has the ability to listen—something both adults lack.

De Brauw and Muster are fantastic in their roles, but it’s difficult to assess Koomen’s performance, which mainly entails posing. Director of Photography Ton Peters uses light and shadow in luxurious and telling ways; there’s nothing static about the visuals or pacing. The one time we see Isaac out-of-doors, riding a bicycle in the street, the cinematography perfectly evokes the joy of movement that he normally forswears. This fleeting moment hints at a potential recovery. There’s also an emotional breakthrough in his parents’ relationship, a temporary cessation of their bickering prefaced by Roos’ wise suggestion, “Shall we just say nothing for a couple of minutes?” They will fight again and Isaac won’t rejoin the living all at once, but the lines of communication are open and, as I read Stages, that’s what counts.