close
This doc is like the vegetables it prescribes: raw and very mixed 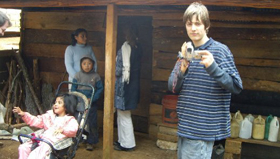 The Beautiful Truth ’s director rehashed what it’s like to be back slumped in your plastic-chair-slash-bubble-gummed-desk in eighth grade biology class, where the chalkboard was curtained with a white pull down coffee-stained screen, the lights hit and for a half-hour a scorpion got devoured by a ferocious herd of ants, or paramecium did the jig before a blaring light. For 92 minutes this cleverly titled film pleas the case that a cure for Cancer has been around since the late 1920s, when a maverick scientist named Dr. Max Gerson proved through successful case studies the synonymous link between diet and the disease. The skeptical viewer might be compelled to look a littler deeper at some of the literature out there and scrutinize (rather than simply chuck) nutritional facts on the back of their canned soup and purchase an organic carrot or two. But most folks will skip the theatrical affair and run out instead for their three-patty meat-monstrosity for three bucks and Monopoly points.

A few stinging epigraphs are presented in high school book report fashion at the beginning of the film that set you up for what’s to come. They all hint at the fabrications about cancer and its origins. One notable quote by a doctor reads, “There have been many cancer cures and all have been ruthlessly and systematically suppressed with a Gestapo-like thoroughness by the cancer establishment.” A narrator speaks in quickstep as we meet our lead character Garret, a 15 year-old dropout whose first home school project is to go on the road followed by his dad’s camera and figure out what Dr. Gerson’s cure really is, if it stands-up and why it’s not universally applied.

The V.O. is spoken by the director himself. He lays this over views of earth from space, which are teamed with quick montage portraits of various scientists and footage of cancer cells seen in time-lapsed through a specular microscope. Garret, tasked with his assignment, goes to the library to fetch intel. He flips through Time Magazine and lands on an ad selling a cancer-combative pharmaceutical. But Garret, who dwells in a small Alaskan town, and tends to baby animals like moose calf and porcupine, is still a kid, and we see him in slo-mo kick-flipping his skateboard, riding his BMX off a pier and making a wish with half-seeded dandelions.

The film introduces Dr. Max Gerson’s daughter Charlotte who has continued her father’s legacy and is convinced that the reason Gerson’s non-toxic treatments have fallen silent is due to the profiteering and the intermarriage between food production and medicinal practices. She adds, “You’re not allowed to heal. There’s too much money to be made on drugs.” It’s a lot to chew on—and swallow. The quick and dirty of it is your dietary regiment must adhere to a criteria. Raw and organic, Vegan, zero animal fat and zero salt. And presto! Your cure awaits.

To exercise the legitimacy of Gerson’s beliefs, the director and his teenager go out and talk to doctors in all types of fields. From dentists who go on-camera to admit that the mercury in your filling is extremely toxic, to the sham that fluoride in the water supply is supposed to benefit your health, to food engineers that admit MSG and chemicals like aspartame all are lethally carcinogenic.

Garret is our interlocutor but he doesn’t talk much outside of some recitations to the camera here and there. It’s The Steve Kroschel Show. Kroschel, the filmmaker, dominates his son’s report. If his intention was to let the teenager seek out the answers on his own, the father is a bit too involved. Still he lets Garrett eat some junk food and pay the price for it. During moments when mercury vapor is registered on a Sniffer machine, or when Kirlian photographs reveal the contrast of intense energy in organic fruits versus the infirm alternative, eyebrows raise. But some of the stunts, including shots of white sugar flooding a small glass saucer or an effigy to the roasted almond as its put into a miniature cardboard casket (cue a reverie of “Taps”), really do little to stir the senses.

The picture carries an element of nostalgia and yet thunders down too hard with a lot of one-sided perspectives. It could be that the seemingly fabricating forces of the FDA and American Cancer Society et. al are in it for the fiscal bottom lines, but you barely get to breathe before you can begin to make up your own mind. Too much to chew on in one sitting and not enough gaps to digest the goodness in this organically-grown specimen of cinema. The lengthy pic may be fighting an unworthy opponent but that doesn’t mean resorting to the one-tracked course. By only stating that the food companies who are stealing all the seeds from farmers won’t grant an interview cheapens the argument. Yes, the filmmaker digs up former employees to chime in but it’s too little and the interactions are bland. It’s a heartening effort to showcase alternative medicine and give it to the people. You feel as though you’re standing in some open source utopia where a juicer and a farmer who’s read Silent Spring will save you from some plague to-be destiny. Yet, as much as it may irk the purists out there who prefer their coffee straight and their lemonade tart, this one could have used some refined sugar.