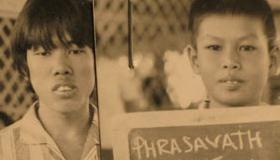 The Betrayal, is an exercise in landing inner peace. The allegorically titled film is a dissonant odyssey wherein a forsaken land and its scorned population are given faces and names. During the Vietnam War, a little unknown country called Laos (sandwiched between Vietnam and Thailand) was a battle playground; its terrain thoroughly lathered with napalm, its people pawned for political purposes. And yet once the fireballs became yesterday’s news, the U.S. sailed off and those that conspired to topple Communism were left to fend for themselves. The psychological wounds and screams ignored or unheard are the war’s collateral damage. Each is given full frontal centerfold treatment here and will surely whip the lashes off the viewer’s romantic preconceptions of war. The risk and uncompromising path the film takes will draw from a bottomless well of hungry audiences in search of a straight story that’s inherently salacious yet doesn’t try to sell any message or jerk any tears.

This epic tale is culled from over two decades of rough and tumble life. From thick, charcoaled, Southeast Asian jungles, to blazing along the crack-epidemic-peaked Brooklyn haunts circa 1980s, Thavi’s (Thavisouk Phrasavath) youth was stolen too fast. He, along with his nine siblings paid a sizable price to belong to this country—and perhaps an even greater one to forgive it. He once parachuted down to the States without a penny to his multi-syllabic foreign name. Filmmaker Ellen Kuras put her subject behind the camera. The experiment worked.

Imagine growing-up in a place ravaged by more bombardments than were dropped in WWI and WWII combined, where the walk to school featured new bodies left for not and thoughts of home recall memories like witnessing a girl “turn to powder” while riding her bicycle. This was Thavi’s everyday. His father, a soldier in the Laotian government’s army decided to switch jerseys during the Vietnam War and become a bomb spotter for the American B52s. Like many who had thought to help the freedom fighters, once the war tangled into a quagmire and coalition forces vanished, Thavi’s big family was put through torturous neglect due to their father’s treasonous acts. Soon enough, their father was kidnapped by men brandishing AK-47s and disappeared into a cloud of dirt. Gone was his patriarch and forced to sustain interrogation and death threats. Thavi decided one New Year’s to leave. He took off late at night, only saying a quick goodbye to his mother. A trembling handheld POV-shot recapturing the frantic escape through jungle like a half bitten-half-drugged Little Red Riding Hood is surreal.

Soon enough, the mother bribed a smuggler willing to paddle the family to Thailand and ultimately gain asylum. Only, she couldn’t take every child. Two sisters were left behind. Flip the record on the turnstile and its 1985, and our pimple-faced narrator with long dark hair is hanging out with friends, showing-off the dragon tattoo on his left bicep. It was here where Thavi relocated his family. To Flatbush, Brooklyn. Not what they had hoped. They had their druthers to expatriate to many countries but opted the States because their father was a brother-in-arms. They were told tales of grandeur: that if you make it to the New World, “you are one step from heaven.” Thavi’s family had no clue they were back in a war zone—this time it was a concrete jungle. Thavi thought they’d gotten on a plane and “landed on the wrong planet.” Their introduction was a no-show sponsor and a two-room shoebox flat, already too small for their Cambodian family of six roommates. The only refuge was a fire escape. As the family drives through their new neighborhood, the things that would otherwise casually be overlooked become noteworthy. A Coca Cola truck with its red and white logo stains the backdrop behind Thavi as does a storefront manned by an Asian elder staring stoically. All around him are fragments of hope set in an austerity.

Daily life was full of more hard times. Gangs ruled the terrain, the murder rate is off the charts. And without the traditional means of growing or procuring food, Thavi turned to fishing in a local park’s pond. Unfortunately, where it was fair game to toss a line in any Laotian body of water, not so here. He often had to outrun the authorities trying to put the kibosh on their fresh caught supper. As it goes, Thavi (now a chain-smoking tough guy) was forced to parent his unruly brothers and sisters. Mom was a wreck—uneducated in this modern world and lacking the tongue to understand her children’s mud-slinging. “I am scared of my own children,” she says. “They never think of the past when I begged for money to feed them.” Life in the borough continues to tailspin leading the narrator to conjure, “America is hell on earth.”

The title of the film works to stoke many fires. The family, like many others, were allegedly deserted by the U.S. who jumped ship during wartime. They were also given a turned batch of goods once they became legitimate citizens. The Laotian government renounced them and confiscated correspondence to the two sisters. More betrayal befalls the family. Their father, believed dead after he was sentenced to a labor camp, pops back momentarily. He carries secrets of his own that further fracture an already cracked egg. The distant past and the Eighties interact as a seamless train wreck. And yet the present is a tantric return to the homeland—bringing so much healing through the reunion with its bountiful pastures and family members long distanced but never forgotten.

The core of this film is its insistence to go straight to the source instead of leaving the talking points to the academics and pundits. Thavi’s narration recreates the fragile moments in what becomes a poetic performance. He’s seen more devastation head-on than any one human being should. Through his narration, that canvas gets a fresh coat and the events rekindle. So too does Thavi fit himself into the film to interview his mother and father too—nobody else could have broken through to them like he did. It is more than a matter of language. Thavi has a personal investment to get to the truth. The camera is simply there to set the record straight. From the funerals of gang wars snatching innocent lives, to MOS archived footage of bombing campaigns dropped like bags of marbles and exploding along twisting green patches of nameless nowhere—it all feels numb. The result is the same explosive yet faceless fatal punctuation. Faceless until now.

The picture is a lyrical prance through a most dreary period in time. That the family weathered monsoons here and afar is something for the ages. A tale of this magnitude has to be told and it takes an unabashedly mature voice to engage in a war of words both savage and serene. Nonfiction slays fiction every time. The newsroom adage, “You can’t make this stuff up” holds.