close
A marvelous exercise in (film) form and (French) language 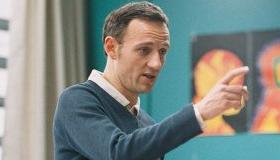 Even if you’re not convinced by the film’s Palme d’Or win at Cannes, be assured this French docudrama about a teacher and his students is one of the best movies of the year. Based on the autobiographical novel by Francois Begaudeau (who plays himself), The Class immerses the viewer in a familiar yet revelatory blackboard jungle and stands as a sterling social and artistic achievement. Accolades and critical acclaim notwithstanding, the film’s box office success in non-French-speaking markets will be limited by its talkiness. The ability to speed-read subtitles will help.

With the exception of the opening sequence in which our Gallic Mr. Chips grabs a quick coffee in a café before the first day of a new school year, The Class never leaves the modern campus of an inner-city Paris high school. We follow the dedicated Francois and his multiracial, working-class students through to the end of term, without detouring into his personal life or their extracurricular existences. While it may present a rich microcosm of French society and shed light on an educational system, the movie deals with a very particular dynamic—the push-and-pull between teacher and pupil.

Director Laurent Cantet and company make no value distinctions between student and teacher, through either technique or content. The audience isn’t privy to what the students say outside of Francois’ classroom, nor do we see or hear what goes on in other sections. Occasionally, we glimpse the students from afar, on the playground for example, and we assume a fly-on-the-wall perspective as teachers vent in their lounge and conduct various formal and informal meetings. But the substance of the movie is felt most during transfixing give-and-take sessions that ultimately determine hierarchies in the classroom.

Real kids from a Paris high school (though not the youth Francois once taught) portray his students. While obviously drawing on their own experiences the kids are not playing themselves, so the filmmaking process helped them transform into actors, many of whom we should hope to see and hear again. As Francois attempts to impart the rules of grammar and instill an appreciation of literature, a compelling drama unfolds; the behavior of one African student is its focal point. During parent-teacher conferences and a suspenseful disciplinary hearing, we see that the struggle for power inside has ripple effects outside the classroom.

Francois stresses the difference between the formal and informal registers of the French language and the distinction has echoes in the narrative and in the movie’s form as a hybrid of fiction and non-fiction. Attempting to impart knowledge, he tries to impose structures on his pupils; rules he recommends they follow if they want to communicate productively in society. Naturally, they resist and their own modes, which seem unruly if not completely irrational by comparison, threaten to bypass the establishment discourse and render it passé.

Ultimately, whether or not Francois’ teachings are relevant to his students’ lives, betrayals of trust and respect occur between—and they don’t result from miscommunication alone. The fundamental issue becomes whether the student-teacher relationship encourages a salubrious respect for authority or necessitates a kind of humiliating submission. The answer, along with the sympathy of the viewer, shifts. There’s a sense that the students are running the asylum, but the faculty and administration are not without blame.

Although it’s a fantastic example of vérité filmmaking that gains much of its power from its verisimilitude, you never mistake The Class for a documentary. In less sure and, ironically, more sensationalizing hands, it might have been monotonous and dispiriting, taking you back to your most dreaded subject in school. But, in mesmerizing fashion, Cantet and Begaudeau have molded material taken from reality into a resonant work of art.