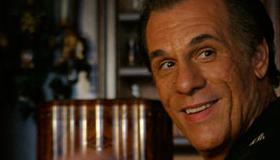 A heist comedy with showbiz savvy oozing from its pores, actor Robert Davi’s directorial debut follows members of a fictional Doo Wop group scrounging for coin and past glory in Los Angeles. Not weighed down by creaky nostalgia or excess sentiment, Davi exhibits a light touch and takes tasteful advantage of a seasoned ensemble. The Dukes won’t appeal to young hipsters but will catch the eye and ear of a relatively mature segment of the moviegoing public whose size shouldn’t be underestimated and whose reliability shouldn’t be overestimated.

While the low-budget project exudes professionalism, the characters have an amateurish, has-been aura—at least in the sorry circumstances in which we find them. You can imagine The Dukes performing before an enthusiastic, graying audience during a public television fundraising marathon. That’s provided they could get their act together. Inseparable middle-aged cousins Danny DePasquale (Davi) and George Zucco (Chazz Palminteri) anchored the successful singing group during their heyday in the nineteen-sixties. Now they’re lucky to get work in late-night commercials dressed up as tomatoes, or with their heads superimposed on top of cartoon bodies hawking the latest karaoke technology. Their main gig is as chefs in their aunt’s Italian restaurant and they nurse a dream of opening their own nightclub.

Money is scarce. Much to his ex-wife’s chagrin, Danny can’t afford to pay the dentist to fix his nine-year-old son’s teeth and refuses to sell the gas-guzzling limo he drives around Tinseltown. George’s emergency visit to the dentist gives them the idea to rob gold from a dental lab. After consulting a safecracker (Bruce Weitz), they launch their scheme with two pals in tow: wheelchair-bound diabetic and former stand-up comic Armond (Frank D’Amico) and a Russian guy named Murph (Elya Baskin). Murph lost his job as an airplane mechanic after testing positive for marijuana and, thanks to his weakness for Mary Jane, the heist scene amuses. George’s appetite for scoring with plus-size women is another source of humor.

Peter Bogdanovich is like a pair of well-worn Gucci loafers in the role of The Dukes’ caring if borderline incompetent manager/agent. Baby-boomers will recognize Joe Campanella in the small part of an elderly thief. This is the type of independent endeavor where you assume Davi has an extra-professional relationship with most everyone involved. And indeed, the actor familiar for playing the heavy in scores of films ( Die Hard, License to Kill ) has been a friend to Palminteri and Bogdanovich for years. The source of the screenplay, which he co-wrote with longtime buddy James Andronica, was Davi’s meeting with Jay Black of Jay and the Americans while working on a TV movie with Frank Sinatra in 1977. Evidently, Davi created a very relaxed atmosphere on this movie’s set. The only one who presses too hard is Brit Miriam Margolyes; her Brooklyn accent as Aunt Vee is a bit much.

The movie’s pacing is a little ragged and it’s difficult to figure out whom besides Danny and George was actually in the singing group or why they stage a fake robbery of Aunt Vee’s eatery. Not surprisingly, the movie builds to a climactic musical performance (of The Tymes’ 1963 hit “So Much in Love”), yet Davi decides to tease the viewer regarding when it will come and doesn’t stage an unrealistically gaudy production number, instead delivering a small, surprisingly heartwarming a cappella finish.

Naturally, the soundtrack is dominated by Doo Wop ditties but there are also songs by Italian crooner Paolo Conte and Davi persuaded music supervisor Nic. tenBroek to create circus-like incidental music similar to themes Nino Rota composed for Fellini. Cinematographer Michael Goi’s efforts to vary the camera angles are appreciated. In general, Davi’s ambition to approximate the look and sound of Italian neo-realist comedies is admirable, even if that influence doesn’t necessarily register in the plot.

A minor labor of love, The Dukes does serve as a reminder that Hollywood and the entertainment industry as a whole, while based in LA now, had their origins in—and were built up by transplants from—the same city streets back east where Doo Wop got its start in the nineteen-fifties. The expression “Oldies but goodies” applies.